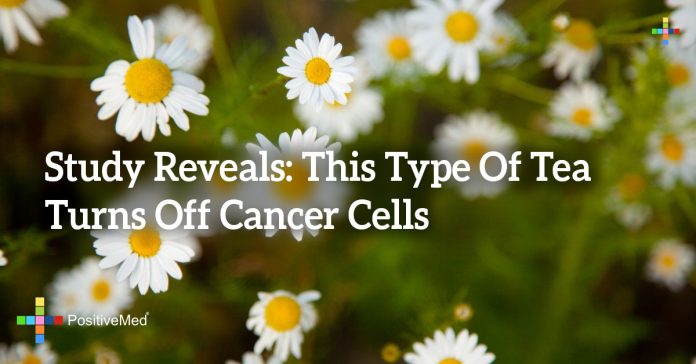 Study Reveals: This Type Of Tea Turns Off Cancer Cells

Millions of dollars have been dedicated to the fight against cancer. Doctors and experts throughout the world work with complex medicines and fascinating theories every day to find a cure. However, the cure to cancer might be found in the simplest of natural foods. Chamomile tea is slowly emerging as a potential fighter against cancer cells. In fact, the Daily Mail reports that chamomile and its frequent use in teas could have “superpowers.”

Cancer and Its Basic Spread

Before you can understand how cancer is warded off by chamomile tea, you must first look at the tumors themselves. Doctors are still looking for exact triggers that cause cancer in certain people. Cancer isn’t simply caused by a virus, such as the common cold, but it’s thought to be caused by both hereditary and environmental factors. When cancer infects a person, their own body cells mutate into tumors. These growths eventually spread into other body organs, and death becomes inevitable.

RELATED ARTICLE: What Tea You Should Be Drinking Based on Your Blood Type!

When doctors look for a cancer cure, they’re normally searching for a way to reverse cellular damage caused by mutations. Within chamomile tea is a flavonoid called apigenin. When you drink chamomile tea, this flavonoid works through your digestive system and out to nearby cells. Scientists are noticing that apigenin is actually aiding proteins in the body by fixing mutated RNA or DNA’s messenger service. As a result, tumors are actually shrinking because the RNA is being repaired with the protein and apigenin help.

In the scientific world, one chamomile tea observation can’t be the answer to cancer’s cure. Many studies must be performed to see the far-reaching effects of apigenin on cancer cells. So far, two main studies have been performed which have included mice and rats. Both rodents were infected with cancer tumors. It was the scientist’s job to shrink the tumors with chamomile tea extract. As a result of their efforts, scientists saw the rodents’ breast cancer subside as the growths shrunk over time.

Scientists also have faith in chamomile tea as a valid cancer fighter because of its anti-inflammatory properties. As you drink the tea, the entire body responds with a calming sensation. If a cancerous area, such as the breast, is currently overgrown with tumors, the tea’s anti-inflammatory properties will alleviate some of the pain symptoms. With less pain, the cancer sufferer has more energy to redirect to possible healing with the tea’s flavonoid superpower.

With every possible disease cure, the marked solution must be taken on a particular schedule for the best results. Although studies are still being conducted around chamomile tea, scientists are seeing the best results in patients when they drink it between two and six times each week. Essentially, a cancer patient could see some relief in their symptoms by simply drinking one cup of tea each day.

Scientists are also noting that chamomile tea’s calming effect also encourages sleep. When you enter deep sleep, the body has a chance to heal itself. Cancer patients gaining more and better quality sleep might find that their disease is subsiding with the help of chamomile tea. Good sleep and apigenin flavonoids might combine to help millions of cancer patients in the future.

Mercola reports that thyroid cancer, in particular, is being fought off with a regimen of chamomile tea. Although a breakthrough in curing cancer is a long way off, there’s some hope that a simple sweet chamomile leaf can actually help those sufferers today with smaller tumors and longer lifespans than before.