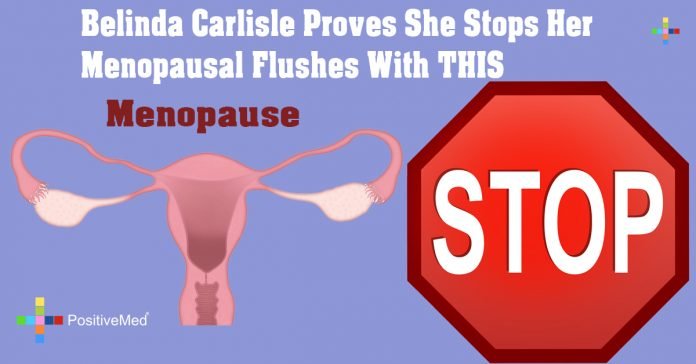 Belinda Carlisle Proves She Stops Her Menopausal Flushes With THIS

Singer Belinda Carlisle has been terrified of entering menopause since her teenage years. With a family history of severe PMS (pre-menstrual syndrome) and menopause symptoms, Carlisle had every reason to worry. But when her turn arrived, only one symptom caused her trouble – hot flashes. In this post, learn why Carlisle believes a tiny magnet can cure women of life-limiting menopause symptoms.

Of Menopause and Magnets

Carlisle told the Daily Mail that she was having up to 40 hot flushes each day during menopause. Carlisle became increasingly desperate to find a remedy to cool her body as the hot flushes began to interfere with her work, her sleep and her ability to get through a day without a box of tissues and several wardrobe changes.

Finally, she consulted a specialist who prescribed a small magnet to be worn in her drawers. The magnet, about the size of a tiny alarm clock battery, has completely cured her of the hot flushes, Carlisle states.

However ecstatic Carlisle may be at her sudden cure, medical experts seem somewhat less eager to endorse this unorthodox treatment for menopause-related hot flashes. The sole research study conducted on the phenomenon was spearheaded by the maker of the magnet, a company called LadyCare.

In the LadyCare study, an estimated 50-70 percent of a test group of 500 menopausal women reported reduced symptoms, including better sleep, fewer hot flushes and a more even mood. But further studies will be needed to corroborate results and rule out other contributing factors.

A Plausible Explanation Does Exist

The prescribing doctor, Nyjon Eccles, M.D., says there is another explanation that could account for the sudden cessation in singer Carlisle’s hot flush symptoms.

However, even Dr. Eccles states that further research is needed to determine how much influence comes from the magnet itself and how much from a placebo effect or other sources.

Known Contraindications to Medical Magnet Use

While insufficient data exists to suggest any dangers specific to the use of a magnet in the pelvic area specifically to alleviate symptoms of menopause, what is known is that use of a magnet can be contraindicated in certain cases.

While there is no doubt that the use of a medical magnet has aided Belinda Carlisle in finding relief from her menopause-related hot flashes, the jury is still out as to whether this approach can be trusted to provide the kind of relief Carlisle has experienced in other patients. Carlisle has repeatedly stated that she has no relationship with LadyCare to endorse or promote the magnet therapy – she simply wishes to share a treatment that has worked for her with other women who might be suffering similarly.

So for now, it would seem that the use of a medical magnet for relief of menopause symptoms should be approached on a case-by-case basis and only after consultation with a medical professional skilled at treating menopause issues.