Scary Diseases You Get from Your Shoes Bottom 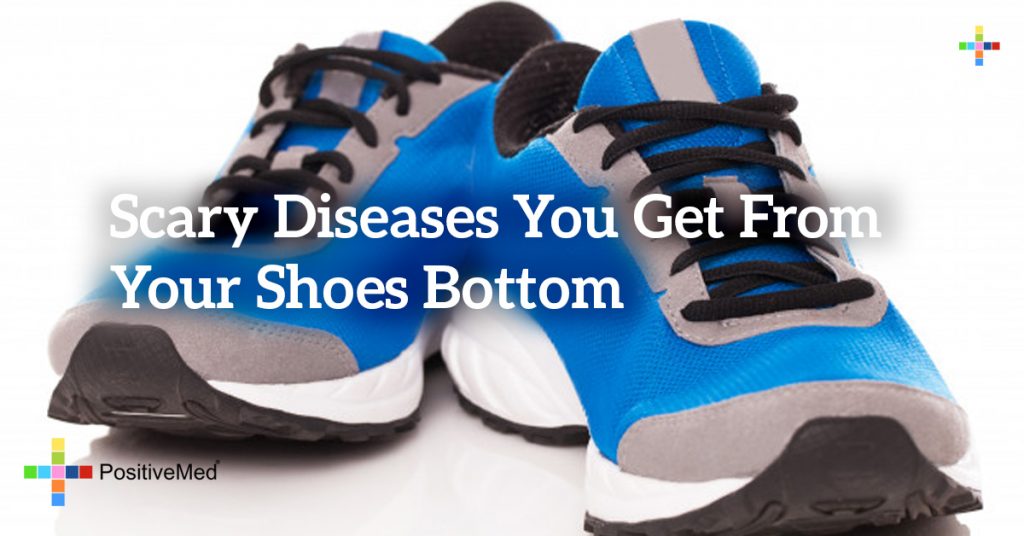 Scary Diseases You Get from Your Shoes Bottom

Do you ever wonder why you and your other household members are always becoming sick? You are constantly bleaching down household surfaces, so what is making everyone so ill? The answer is the one thing that you are not cleaning-the bottom of you and your loved ones’ shoes. Yes, that is right! When you walk outside, your shoes pick up a multitude of germs, bacteria, and diseases. And guess what! Unfortunately, you track those scary diseases on your shoes bottom back in your house where everyone is vulnerable to.

The Frightening Statistics
So lets start with the scary! In the article 6 reasons to remove your shoes inside, written by Melissa Breyer, it is stated that a study was conducted by the University of Arizona where they collected all of the germs and microbes from the bottom of shoe samples. Their observation was shocking! They actually found 421,000 units of bacteria on the outside of shoes, and the so-called diseases were the same ones that we hear about. Yes, I said it-E. coli, Klebsiella pneumonia, and Serratia ficaria, along with many others. In addition to the University of Arizona study, there was an EPA study that provided the first evidence of a specific dangerous herbicide being on the bottom of footwear also known as 2,4-D.

About The Ugly Shoe Diseases
All this talk about these germs being found on the bottom of footwear! How are they threatening? Well here goes!

RELATED ARTICLE: Find Out the Difference Between Bacterial, Parasitic, And Viral Infections

– E.coli
Fully named Escherichia coli, this large bacterial group is found in the environment, foods, and intestines of people and animals. Most strains of E.coli are harmless. However, other kinds can make you extremely sick, causing diarrhea, urinary tract infections, respiratory illnesses, pneumonia, and many other ailments. You may have heard about a roaring epidemic concerning one particular E. coli outbreak in Europe in 2011 known as Shiga toxin E. coli, or STEC for short. This is a distinct and hazardous type of E.coli that causes a severe disease in five to ten percent individuals diagnosed. They will experience bloody diarrhea and hemolytic uremic syndrome, a class of kidney failure. Symptoms of STEC involve severe stomach cramps, often bloody diarrhea, and vomiting. Although most sick people are better within 5-7 days, STEC turns into a life-threatening disease for a few.

– Klebsiella pneumonia
Another bacterium that was found on the shoe samples in the study, Klebsiella pneumonia causes a multitude of diseases depending on which part of the body it infects. This unhealthy bacterium is prone to result in a variety of illnesses, including pneumonia, bloodstream infections, wound infections, surgical site infections, meningitis, and urinary tract infections. Symptoms largely rely upon where the infection is in the body, but ranges in fever, chills, rash, light-headedness, altered mental states, a cough, producing yellow, green, or bloody mucus, and breathing issues. And to make it even worse, some strains of K. pneumoniae are resistant to most antibiotics. In addition, in worse case scenarios, all antibiotics will have no effect at all.

– Serratia ficaria
This extremely rare bacterium, which mostly affects patients in hospitals, causes infections that colonizes the respiratory and urinary tracts, instead of the gastrointestinal tracts. The Serratia infection is accountable for approximately two percent of nosocomial infections of the bloodstream, lower respiratory tract, urinary tract, surgical wounds, and skin and soft tissues in adult patients. However, it is possible for this bacterium to escape the hospital environment by hanging on to footwear.

– 2,4-D
Full name being 2,4-Dichlorophenoxyacetic acid, this is an organic compound and systemic herbicide which selectively kills most broadleaf weeds by causing uncontrolled growth in them. It has been found that if humans are exposed to 2,4-D, they may be at risk for developing cancer. There are also findings that exposure to this particular acid is linked to causing non-Hodgkin’s lymphoma.

Prevention Method
Obviously, there is one effective and excellent way to prevent exposure to the bacterium found on shoes. Guess what that is! Make it a habit to always take off your shoes before entering your residence. When shoes are tracked on household floors, whatever germs is on your shoes are left behind on the ground. This is especially risky for children who play on the floor, drop their pacifiers, bottles, and sippy cups on the ground or even have a habit of putting their hands in their mouths. Furthermore, if there are open wounds on the skin that come in contact with the ground, there is a high possibility of the bacteria from the floor spreading to the individual. So protect yourself and your loved ones! Do not make it where you will have regrets in the future. Make it a common practice to have everyone take off their shoes before entering the residence. This is the only way!

PrevPreviousMature Relationship vs. Immature. Which is Yours?
NextSo, What’s So Unique About Type O Blood?Next