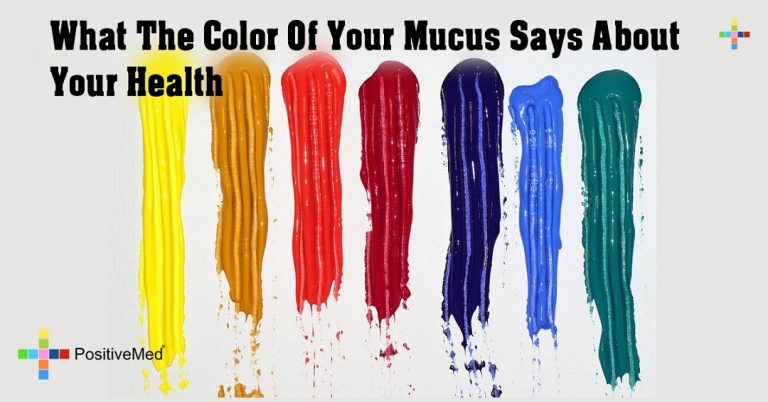 What The Color Of Your Mucus Says About Your Health

For centuries, people have been observing the color of expulsed phlegm to determine the condition of their body’s health. Although medical science has through research studies determined otherwise, as we cover in our article below, the habit continues to modern times. Be it as it is, there are several color ranges of phlegm which we list below, including:

The most common form of phlegm and generally the most harmless, as when produced by a cold, allergy or some kind of irritant, this is produced 24/7. If left to its own devices, this phlegm many times goes down the back of one’s throat and eventually down to the stomach where it’s dissolved.

White or gray phlegm usually means that there is a respiratory infection present, a sinus congestion condition or that it’s simply caused by body tissue that has become inflamed eventually stopping the natural flow of mucus

While this is many times considered an indication of some viral or bacterial infection, it can also be a positive sign: the immune system may be launching its anti-infection cells in a counter-attack against an invading infection.

In one research study from Düsseldorf, Germany, a total of 42 GP practices were studied. Participants were ages 16 to 82. In various samplings of both green or yellow cultures of sputum, only 12 percent indicated a bacterial infection.

Consequently, there were no conclusive findings that suggested that yellowish or greenish sputum is a strong enough diagnostic sign of a bacterial infection. The findings of this study couldn’t be used to confirm bacterial bronchitis or used as a basis for or against antibiotic therapy.

Typically found expulsed by smokers, a combination of tar, nicotine and resins accumulate in the bronchial and lung passages producing this colored sputum. Other possible causes of brown phlegm are acid reflux when you’ve been drinking red wine, chocolate or coffee. Likewise, extensive drinking, environmental toxins, and even a possible infection are other possible causes of brown colored phlegm.

This can be tricky as pink may be an indicator of some pulmonary infection or that a nasal tissue or vessel has broken and formed a leak into the mucus.

Get to a physician immediately.

Natural Treatments In Case of Phlegm:

Americans are estimated to have about two colds a year with a total price of about $40 billion per year in OTC products sold. Below are six things that you can do that’ll cost a lot less and do a lot more to help during a cold:

1- Drink plenty of sugar-free liquids such as hot chicken broth or soup and herbal teas to thin out the phlegm.

2- Hold off from dairy products as dairy tends to increase mucus. You may try almond or coconut milk instead.

3- Try adding eucalyptus oil to a pot of boiling hot water, then throwing a towel over your head as you lean over the pot inhaling deeply.

4- Adding a teaspoon of turmeric or ginger to half a glass of hot water with lemon zest and lemon juice can help. Both spices contain antiseptic properties that fight infections.

5- Eat spicy hot food such as hot chili peppers to loosen up the mucus. You may also try a combination of raw garlic boiled with chicken broth and let stand for several minutes.

6- Get plenty of sun, about 10 minutes a day or more. Also, take plenty of Vitamin D as studies indicate a correlation between low levels of Vitamin D and respiratory infections.

Do you make a habit of checking out what you cough up or would you rather not?