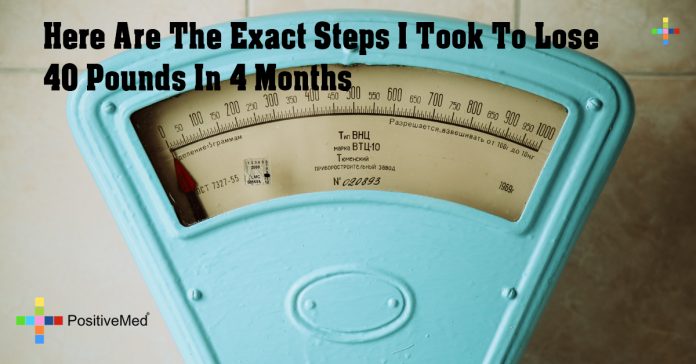 My story starts out the same as the story of just about every American. I loved staying in and having Netflix marathons while eating pizza, chips, candy and other junk foods. I often went out for lunch at work, and would stop at the drive through on my way home for dinner. I’d get stressed out and eat an ice cream sundae to make myself feel better. I never exercised and I was eating too much of the wrong types of foods. The weight came on so slowly that I didn’t realize it was happening until I stepped on the scale one day and was horrified by what I saw. 267 pounds.

Getting Motivated
You might think that that seeing those numbers on the scale would spark an immediate change. Instead, it sent me spiraling into a depression. I made myself a giant plate of nachos, dripping with melted cheese. For breakfast. Needless to say, there were no big changes in my life. In my head, though, I knew something had to change.

I then ran into an old friend from high school. He had been a tall, scrawny guy back then, but now he was really buff. He told me that he had gotten really into exercise a few years back. He got addicted to the feeling of euphoria he felt after a workout and the body just came along with that. I wondered if the same thing could happen to me.

Exercise
Luckily, I got a free gym membership through my employer. I was so nervous the first day I went there to work out. I thought that everyone would stare at me and think that I was disgusting. That’s how I felt. With my head held high, I stepped on the treadmill and went for a walk. It was hard. I got out of breath and I was sweating a ton. I pushed through, though, and at the end of my workout, I was feeling pretty good about myself. I had survived. Even though my muscles were sore, I went back the next day and the next. It became a habit. I also lost a few pounds, but the weight wasn’t coming off as fast as I liked.

Eating Right
Another friend suggested that I started keeping a food diet to see what I was really eating every day. Boy was that eye-opening. Seeing everything listed out like that made me realize that I needed to make some changes. Like many people, though, I’d tried diets before and always gained the weight back. I didn’t want that to happen again.

Though I knew that extreme weight loss isn’t safe long-term, I read on WebMD that a person of my size could safely lose as much as three pounds a week through making dietary changes. The key would be eating a lot of vegetables, fruits, lean meats and non-fat dairy. Processed foods, added sugar and extra salt would make it more difficult to lose weight.

RELATED ARTICLE: 4 Horrific Side Effects Of Extreme Weight Loss No One Tells About

It was a very difficult change to make, so I just made up my mind to commit to eating very healthy for a week. At the end of that week, I definitely noticed that I was feeling a lot better, which made it easier to keep eating that way. After two weeks, I decided to “cheat” by eating one of the donuts in the company break room. I found that I didn’t even like it. My taste buds had changed.

After three months, I’m now down 30 pounds and I’ve never felt better. I know that I have a lot of weights to lose still, but I’ve also come to realize that this journey is more about how I feel inside from treating my body right than about how I look on the outside. The best part is that I didn’t need any expensive extras to make this happen. With simple exercise and healthy eating, I was able to lose the weight.