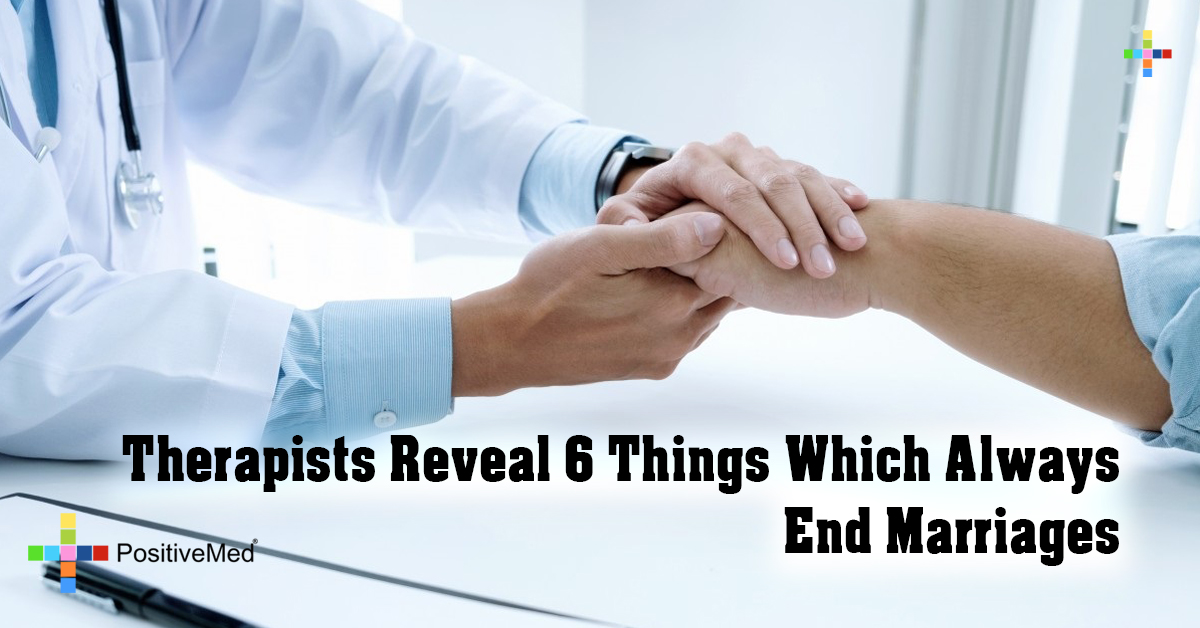 While there may not be anyone who gets married with plans on getting divorced sooner than later, time and again there seem to be things that are almost guaranteed to end marriages. These are issues that, over and over, have proved to be overall detrimental not only to the happiness of the people in a marriage but to marriages themselves. Revealed by Couples Therapists, here’s 6 things that end marriages:

1. Less Than Stellar Communication
Communication isn’t simply about moving past arguments or snide comments. Communication is about both parties being able to fully understand the other. Sometimes, getting in front of our around an argument can feel like a victory. But if you find that you’re avoiding a fight more than you’re talking to each other, there’s a good chance the relationship has become one where both parties have given up on trying to be understood by the other. In marriage, giving up can often lead to getting out.

RELATED ARTICLE: The Top 3 Reasons Why So Many Relationships End Up Failing!

2. Inability To Discuss Finances
Arguing about money or treating it differently than your partner is one of the quickest ways to add unnecessary stress to your relationship. At the end of the day, money is going to be something that works its way into every aspect of your marriage. Even if you aren’t sharing a bank account, you’re sharing a living space and very likely sharing other bills as well. If you can’t agree on how much is in the budget for clothes or food, there’s a good chance you may not end up agreeing on other big-ticket relationship issues as well.

3. Open Displays Of Contempt
This is probably the nastiest thing on the list. Everyone has stressful days now and again. Sometimes, the stress accumulated throughout the day can end up finding its way to being thrust onto your partner. If this happens too often, it can easily become a habit. Before you know it, you spend more time talking nasty to each other than you do talk nicely. When the person by your side every day is also the person bringing you down, a breakup is very likely soon to follow.

4. A Distinct Lack Of Physical Contacts
Humans are social creatures. Like all primates, our young need to be held and touched. This need for physical contact doesn’t simply disappear as we grow older. Almost nothing will see a marriage end faster than a distinct lack of physical connection. Doing these things, and wanting to do them, is what helps to maintain higher levels of contact with your partner. Almost every couples therapist can probably agree – once the physical contact is gone, the marriage is probably going to be quick to sour.

RELATED ARTICLE: Would You Unfriend Your Spouse On Facebook To Save The Marriage?

5. Keeping Big Secrets From Your Partner
With the Ashley Madison hack from August 2015, a large part of America was forced to ask themselves whether or not they think their partners might be keeping secrets from them. For the hundreds affected by Ashley Madison’s database being pilfered, their marriages were forced to deal with what happens when one partner lives a double life behind the other’s back. Trust is one of the most important things in any relationship, and especially important in a marriage. If you break that trust by living a double life, there is likely little you can do to convince your partner to trust you again.

6. Allowing Yourselves To Become Emotionally Distant
Emotional distance is often referred to as “growing apart.” This can happen when two people simply wind up wanting different things out of life and is especially common for younger couples. As we grow older, our desires mature and sometimes we become less like-minded with our spouses. When two people mature and change in different ways, the things that drew them to each other may very well disappear completely.

Nobody is perfect. Even the best of us can fall victim to circumstance or allow ourselves to develop unhealthy habits. Luckily, acknowledging your own insecurities and bad habits is the first step on the road to health and happiness. By working to avoid or discontinue the above, your chances of a happy marriage are certainly higher than ever.