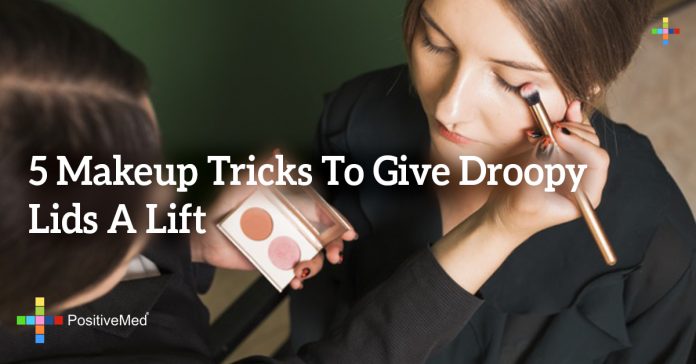 5 Makeup Tricks To Give Droopy Lids A Lift

According to the American Society of Ophthalmic and Reconstructive Surgery website, droopy lids can be caused by the natural aging process, sustained trauma or a neurological disease. For those not interested in pursuing surgical alternatives, there are numerous makeup tricks that can minimize the appearance of heavy lids.

Famed makeup artist Bobbi Brown provides some tips via Prevention.com. Her overall advice is two-fold: first, draw attention away from the lids themselves and second, make eyes pop. Her detailed suggestions follow:

Brown’s first trick is to accentuate the brows. Choose a powdered shadow that matches your natural brow color and apply conservatively to brows using an angled brush. For a natural look, use short strokes and be careful not to apply too much.

Next, she recommends strategically working with shadow on the lid and brow bone to draw attention away from heavy lids. First, she advises applying a medium brown or slate shadow to the outer half of the eyelid. Second, she suggests applying a highlighter to the brow bone using a shadow brush that is small enough to allow for precision. By applying shadow in this way, you will open up the look of your eyes.

Next, she advises lining the eyes to make them appear wider. A black or grey powder shadow applied with a liner brush is preferable. Apply heavier liner to the top of the lid just above the lashes and lighter or residual liner along the lower lashes. Connect both lines at the outer eye corner and draw upward slightly.

Lastly, Brown suggests making eyes pop with carefully applied mascara. Brown recommends curling lashes and applying two coats of black mascara. Mascara should be applied by starting at the base of the top lashes and slowly pulling outward to lengthen lashes. For bottom lashes, apply mascara by lightly touching the wand to the lashes. A mascara that thickens will works best. If lashes have a natural bend, then the curling process can be skipped. If lashes are sparse, consider using false lashes for the ultimate wide-eyed effect.

A fifth tip comes from makeup artist Derrick Rutledge who has worked his magic on Michelle Obama and Oprah. Via Oprah.com, he recommends adding an iridescent powder shadow to the inner corner of the eyes to neutralize the dark appearance of droopy eyes. The effect can be achieved by dabbing powder on with a small shadow brush. The powder should be light in color and applied sparingly so the effect is just noticeable.

Droopy lids are common and having some makeup tricks up your sleeve to minimize their appearance can’t hurt. Good luck implementing these suggestions at home.