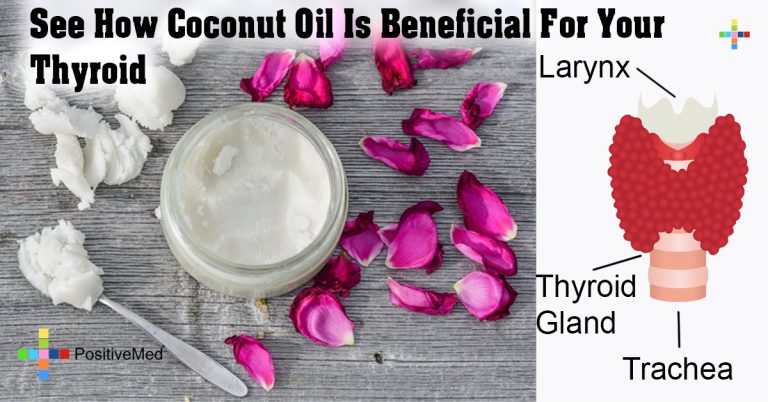 See How Coconut Oil Is Beneficial For Your Thyroid Health

Thyroid problems can present themselves in many ways. You may be feel tired and sluggish, experience weight loss or gain, mood swings, brittle nails and a number of other symptoms. Standard medical treatments such as prescription medications may not suffice. An alternative, natural remedy is available: coconut oil.

What is the thyroid?

The thyroid produces hormones that regulate metabolism, body temperature, the body’s use of vitamins and the growth of tissue. A thyroid problem will usually fall into one of two categories: hypothyroidism or hyperthyroidism.

RELATED ARTICLE: 10 Signs You May Have A Thyroid Problem

Coconut oil is derived from the coconut and contains a high level of saturated fats (the healthy fats!). It is commonly found in tropical countries such as India, Thailand and the Philippines. Once popular in the United States, coconut oil was replaced by the corn and soy industries. Soy and corn oils, however, have detrimental effects on thyroid function.

One research study reported goiter and elevated thyroid levels in adults who consumed 30 grams of pickled soybeans every day for one month. Once they stopped consuming the soybeans, their thyroid levels decreased and their goiters reduced in size.

Another study found that children fed soy formula as infants were more likely to be diagnosed with autoimmune thyroid disease as teenagers. Dr. Ray Peat, a physiologist, says that the introduction of corn and soy oils into our diets has caused many hormonal changes, particularly with the thyroid. These oils block thyroid hormone secretion, which causes the body to become deficient in protective hormones such as progesterone and pregnenolone.

Fortunately, coconut oil has made a recent reappearance in Western culture because of its noted health benefits, including: immune system function, hair and nail growth, cholesterol maintenance and proper digestion.

Coconut Oil and Your Thyroid

Unlike soy oil, coconut oil does not interfere with thyroid function. In fact, it works to promote metabolism and protect the body from deadly viruses.

Coconut oil contains lauric acid, which the human body converts into monolaurin, an acid that helps fight bacteria and viruses. It can help fight off a variety of illnesses and bacteria such as yeast, fungus and candida.

RELATED ARTICLE: The Many Benefits of Coconut Oil you Didn’t Know About

Replacing standard corn and soy oils with coconut oils is one of the healthiest and easiest changes you can make. Coconut oil can be enjoyed many ways, such as cooking vegetables, adding to smoothies, soups and hot drinks, and drinking as coconut milk. Not only will it improve thyroid function, but it provides a number of other health benefits. Talk to your healthcare provider before incorporating coconut oil into your health regimen.