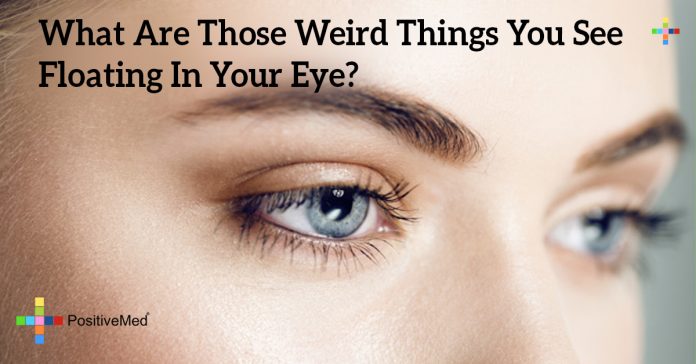 What Are Those Weird Things You See Floating In Your Eye?

Just about everyone experiences “floaters”– tiny, worm-like objects that appear to float across one’s field of vision. What are they made of, and should they be a cause for concern?

While the vast majority of floaters aren’t a sign of anything sinister, there are several different things that can cause them:

Sometimes, floaters can seem to appear suddenly. Usually, this isn’t actually the case. In some positions, such as lying on one’s back, floaters can end up settling toward the retina and appearing more visible than usual. Monochromatic backdrops and bright lights can also make floaters show up more distinctly than usual.

Though they generally aren’t a problem, floaters can sometimes become so numerous that they begin obstructing vision. In instances like these, surgery or laser treatments can help get rid of them. Unfortunately, these treatments can run the risk of causing retinal detachment or cataracts and are therefore reserved for extreme cases.

While anything that obstructs your vision can be distressing, the National Eye Institute assures people that the vast majority of floaters aren’t a cause for concern. Those that are are often of sudden onset and accompanied by other symptoms, such as flashing or a loss of peripheral vision. For everyone else, while floaters may be occasionally annoying, they’re nothing to worry about.