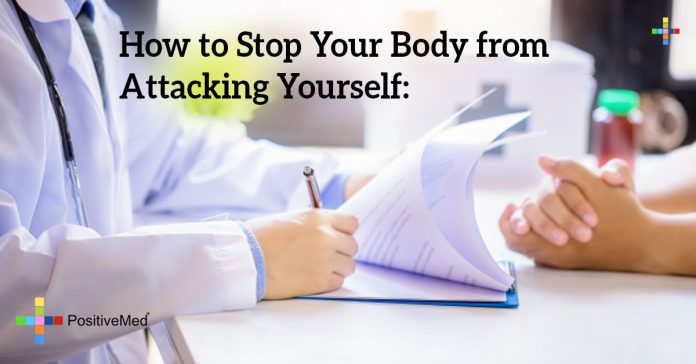 How to Stop Your Body from Attacking Yourself:

Before you were born, immune cells that may have recognized body tissues were destroyed to prevent tissue damage later. The lack of reaction to your own body cells is called tolerance. Autoimmune disease causes immune cells to mistake normal cells for invaders. As a result, your immune system attacks your own body.

A virus or other infectious organism can also fool your immune system into thinking that part of your body is foreign. This breaks tolerance and causes the immune cells to attack your body instead of the infection. A loss of tolerance is likely due to genetics.

According to health writers at the Mayo Clinic, 80 percent of people affected by autoimmune disease are women. Some disorders are more prevalent in women, while others affect women exclusively. The National Institutes of Health (NIH) calls autoimmunity a major health issue that is responsible for many chronic conditions.

If you suffer from immune deficiency, you are not alone. According to NIH estimates, 23.5 million Americans have autoimmune disorders. The American Autoimmune Related Disease Association (AARDA) thinks the number may be as high as 50 million. Symptoms can affect all parts of your body and may require treatment by a specialist.

1. Ask your doctor to check for Lyme disease, yeast infections or other hidden infections.
2. Ask your doctor to check for hidden food allergies, or try a diet designed to eliminate allergens.
3. Request a blood test to check for celiac disease or gluten sensitivity.
4. Certain metals can cause autoimmunity, so request a test for heavy metal toxicity.
5. Heal your gut to cure irritable bowel syndrome (IBS).
6. Calm your immune system with vitamins C and D, fish oil, probiotics and other nutrients.
7. Follow a regular exercise schedule to reduce inflammation.
8. Practice deep breathing, massage, yoga and other stress-relieving techniques.
9. Discuss Functional Medicine with your doctor and encourage a therapeutic partnership.