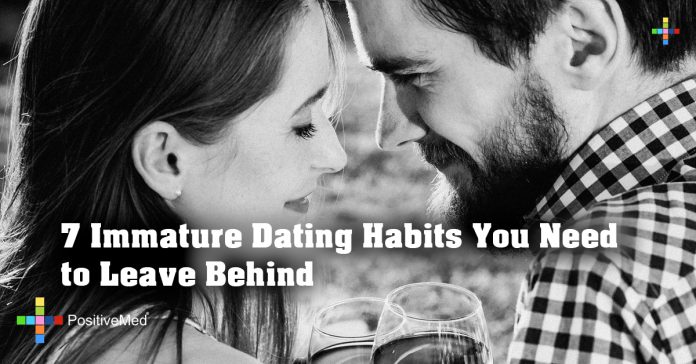 7 Immature Dating Habits You Need to Leave Behind

Dating seems to get more and more difficult with all the different avenues of meeting and communicating; however, just because you met online or because you generally communicate through text message is no reason to behave like a tenth grader. If you’re a grown man in your twenties or beyond, it’s time to start dating like it. Leave these undesirable dating habits behind:

1. Waiting to call after a date
We have all heard that women should not wait by the phone to get a call after a date, and that’s definitely true, but what about the guys? If you like the lady and want to see her again, then just go ahead and call or text. There is no rule that says you have to wait three days or a week or anything. Stop playing games and just do it.

2. Not defining the relationship
We have all been there. Are we? Aren’t we? If you don’t want her seeing other guys, then it’s safe to say she’s your girlfriend. Show her the same courtesy and stop seeing other girls. If you don’t want to talk about the situation, it’s time to grow up and let the woman know what you are thinking.

3. Avoiding PDA
That doesn’t mean you should be making out in public, but holding hands or an arm around the shoulder are nice gestures that let a woman know you care. If you are avoiding touching her in public, she may feel that you don’t want others to know you are together. Don’t be afraid to show that you’re proud to be with her.

4. Expecting Love making
If you take a woman out, that is not an agreement she will sleep with you. Not the first time, third time, or even tenth time. It’s a huge turn off to be pressured for making love, and the more you push, the less likely it is that she will go out with you again. If you are just looking for another notch in the belt, then skip the date and just head to the nearest bar around closing time.

5. Continuing to see someone you aren’t interested in
It can be hard to end things with someone, even early on, but it’s not nice to continue dating someone you don’t see a future with, even casually. You’re wasting your time and theirs. If you have only been on a few dates, and there has been no mention of exclusivity, then it’s acceptable to let them know you don’t want to date them. It might sound harsh, but it is a lot nicer than having them guess about your feelings for way too long.

7. Being needy
Women aren’t the only needy ones. If you are texting , emailing, and facebooking her nonstop, then she is going to get sick of you. Most people have responsibilities to take care of during the day, and a date who expects you to be in constant contact is a real problem. One message (maximum of two) is acceptable and then wait for a response. If she doesn’t immediately respond, don’t go crazy. She is probably busy at work or school or whatever her life entails. There is a line between letting her know you’re interested and being just plain needy.

Without all of these immature habits as part of your dating routine, your life will get a lot simpler. Your date will know where you stand, and you won’t be stuck in an undesirable dating situation. Just grow up and start treating your dates like people you respect.