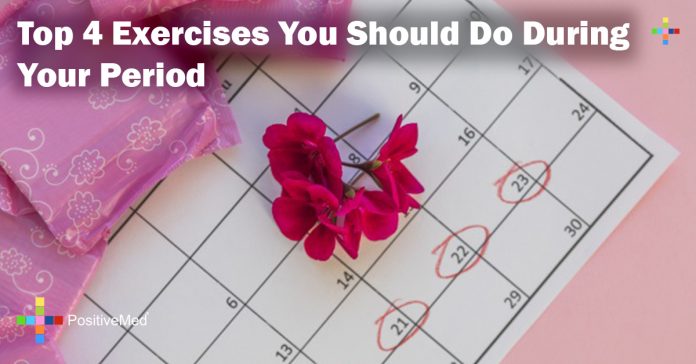 Top 4 Exercises You Should Do During Your Period

Curling up in bed with a heating pad may sound like a great idea during one’s period, and it’ll be difficult to leave, but most health experts say that’s the wrong way to go. A half hour of aerobic exercise will help relieve bloating, cramps, and mood swings, as well as a lot of other symptoms of PMS.

During menstruation, most people experience fatigue and a loss of interest in exercise. Working on your regular workout with moderate intensity is the best way to go. One’s menstrual cycle does not hamper performance – in fact, they call it the female advantage. At the same time in the cycle where cravings and cramps spike, those same hormonal changes give you a boost in muscle recovery and pain tolerance.

So, what should you do once you get your gear on?

Even those who are against a hardcore workout can agree that walking will get you moving without any injury or danger. Walking isn’t a huge calorie burner, but you’ll feel better about getting out and about and more energized. Don’t stress the calorie count, just get moving!

If you’re feeling up to it, feel free to go for a jog. Endorphins that are released during an intense workout can help knock out those period blues you’re sporting. Don’t forget to stay hydrated before, after, and during as researchers say it’s easier to dehydrate when you’re having your period. Even if it’s not true, may as well err on the side of caution.

Yoga is a great choice for exercise, as long as you avoid the inverted poses, as they may do more harm than good. Yoga alleviates stress, tension, and increases the flow of oxygen and blood around the body. It’ll also provide time to focus on yourself and your emotions.

Weightlifting is also a viable option, as long as you use lighter than usual weights and lower reps. Work all major muscle groups and if you start to feel weak or fatigued, stop immediately.

Listen to your body, though, if going to the gym seems too daunting – stay home and rest. One or two days of rest should be part of every workout plan, regardless. During the commercial breaks, feel free to shake your tailfeather to whatever music you like or plank (get down on the floor, put your arms and elbows under your chest, raise your body with your forearms and toes, hold). Planking can be intense, so start by holding the plank during every other commercial and work up to holding through an entire commercial break.

Working out from home is always fun. You can throw in an exercise DVD or OnDemand workout. There’s no need for workout gear and quitting early isn’t embarrassing if it’s just you in your living room. Your period isn’t an excuse to skip your workout routine, but if you need the break don’t be afraid to take it. After all, women are two to ten times more likely to get ACL injuries than men and most of them occur just before or at the start of menstruation.