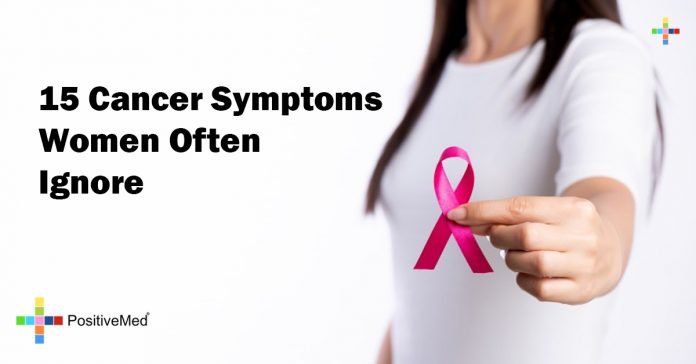 According to the CDC, an average of 69.8% of women over 50 have had a mammogram in the last two years (circa 2010), but cancer isn’t always caught in the screening tests and definitely won’t be found during a screening if you don’t have it done in the first place. Often when women suspect something, fear keeps them from talking to their doctor about it and that’s definitely the wrong way to go. Except in notable cases, if you think there’s something wrong, there probably is. Trust your instincts about your body, it could save your life.

Here are some symptoms, which are serious even if they don’t always mean cancer, people will often overlook or ignore that could be harmful in the long run:

1 • A Chronic cough, chest pain, wheezing, or shortness of breath. Several types of cancer, including lung tumors and leukemia, can cause symptoms that are similar to a bad cough or bronchitis. Some patients say the pain will extend up to their shoulder and even down the arm.

2 • Breast changes. Most breast lumps aren’t cancer, but that doesn’t mean they shouldn’t be investigated by a doctor anyway. Other changes may include: nipples that suddenly are inverted, nipple discharge, skin dimpling or puckering, (often called orange-peel skin) and scaliness or redness of the nipple or skin of the breast. This goes for everyone, not only women suffer from breast cancer.

4 • Bloating, abdominal pain, change in bowel habits, rectal bleeding, and/or blood in stool or urine. Women are natural bloaters, but if it doesn’t go away in a week or two, it’s time to see your doctor – particularly if it’s combined with bleeding or unplanned weight loss. All of these may mean ovarian cancer, but can also mean colon, bladder, or kidney cancer.

5 • Skin changes. If a mole or two is changing shape/color/size, it’s time to see your doctor. Immediately.

6 • Heartburn. Stress, alcohol, and too much food (and all three!) can cause heartburn. Try changing your diet for a couple weeks and see if it goes away… If it doesn’t? You may have stomach, esophageal, or ovarian cancer.

7 • Weakness or fatigue. Many people are exhausted from leading hectic lives, but tiredness that simply doesn’t go away? That isn’t healthy, particularly if it’s combined with any of the other symptoms on this list.

8 • Mouth changes. If you smoke, be on the lookout for white spots in your mouth or on your lips as both are a sign of oral cancer.

9 • Heavy bleeding or bleeding between periods. Many people report this as the first indicator of uterine or endometrial cancer. Ask your doctor for a transvaginal ultrasound.

10 • Pain, particularly in the back. Everyone has aches and pains, which is why this is so often overlooked. Ongoing pain can signal the brain, bone, liver, breast, and many other cancers. Check with your doctor if any unexplained pains have lasted over a month.

11 • Changes in the nails. Unexplained changes in toenails or fingernails can indicate many different kinds of cancer. Be on the lookout for color changes such as white or pale beds or a brown/black streak or dot under the nail. Clubbing, enlargement of the ends of the fingers with nails that curve over the tips, is a sign of lung cancer.

12 • Abdominal pain accompanied by depression. While this one is rare, it’s also overlooked. Unexplained belly pain with depression can mean pancreatic cancer. Should you be worried? Only if your family has a history of the disease or you are a heavy drinker, then you should get into a doctor straight away. Otherwise, if the pain doesn’t go away in a couple weeks, it would be a good idea to see a doctor anyway.

13 • Frequent infections or fever. A high temperature that can’t be explained and just doesn’t go away can mean leukemia or another blood cancer, share your concerns with your doctor immediately.

14 • Discharge. It isn’t something people talk about, but smelly or foul vaginal discharge can be a symptom of cervical cancer. The discharge may occur between periods or after menopause and sometimes will have blood in it. It’s best not to self-treat discharge changes with over-the-counter medications and visit your doctor. At the very least, it could be an infection and most of those can’t be treated with over-the-counter stuff anyway.

15 • Weight loss without trying. Nearly everyone wishes their extra pounds would just fall off, but losing more than ten pounds without any changes in your eating or exercise habits can indicate a big problem. Most unintended weight loss isn’t cancer, it can be the thyroid, but it may also be stomach, lung, or pancreatic cancer. Better to err on the side of caution.