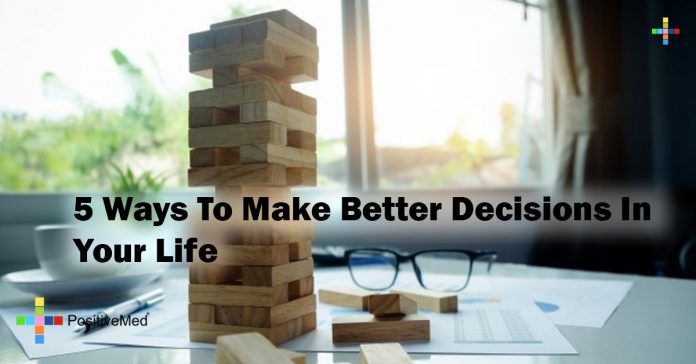 5 Ways To Make Better Decisions In Your Life

Making better decisions in life will typically lead a person to developing better outcomes in life as well. For this reason, many people spend quality time learning how to make healthy, objective choices. On the other hand, many other people go through life making one poor decision after another. If you are looking to avoid this unfruitful pattern of decision making, then here are five ideas to consider more carefully.

Most people operate from a very subjective mindset. They reason with their bias totally engaged at all times. They believe the world revolves around the bias they harbor. Objective thinkers, on the other hand, constantly ask themselves, “what is truly the case?” Such individuals prefer to appeal to the reality of a situation, rather than waste their lives pandering to their own bias. These individuals understand that to get to meaningful outcomes, it is critical to see and understand things as they truly are. Since they take the time to reason objectively, their decisions are generally based in a very realistic understanding of what is at play behind the decisions they make.

Another problem that leads people to make poor decisions is that people generally confuse logical necessity with logical sufficiency. People who only concern themselves with what is necessarily true typically have no basis for making a decision that will guarantee a given outcome they desire to achieve. On the other hand, people who reason using logical sufficiency will base decisions in the idea that a sufficient number of conditions are met to guarantee a specified outcome will occur. This difference in reasoning tends to ensure better decisions and better outcomes at the same time, since the outcome achieved is sufficiently guaranteed

In the early days of healthcare, it has been noted that much of what doctors and patients knew was based in clinical experience. (1) Today, with the advancements in communication and bio-medical science, it is easier to perform studies and to allow the evidence and information acquired to propagate across the medical community much faster than in the past. (2) With evidence in hand, this inevitably helps medical practitioners to make informed, tested decisions with a higher degree of accuracy than ever before. Hence, making decisions based around evidence is generally better than ignoring evidence when making a decision.

4. The Science Behind Gambling

In a recent study, Erik Schlicht and associates studied how people gambled with respect to their reaction to their opponent’s facial features. What was learned was that the typical neutral, disinterested poker face people use is not the most effective facial expression for making an opponent engage in bad decision making. People seem predisposed to rather make poor decisions when confronted with an opponent with a more trustworthy facial expression. (3) This tends to suggest that better decisions will be made, if a person more effectively ignores the facial expressions of others in a social setting. It may be that we are too trusting of people who simply look more trustworthy than they truly are.

5. The Role of Emotions in Healthy Decision Making

Extending our social setting to the realm of decisions involving safe love-making, it was recently found that typical psychological testing methods were not complete enough to determine outcomes observed in a study on condom use during love-making. It was determined, through this study, that human emotions account for a significant basis behind safe love-making practices in the 60-participants studied in the research effort. (4) The outcome tends to suggest that when it comes to matters of health, where emotions run contrary to safety concerns, that our emotions actually lead us to poor decision making. This in turn may tend to encourage the belief that emotions are contrary to logic, but the decision to jump to the conclusion that that is the case may involve disregarding the issues of objectivity and logical sufficiency discussed earlier.