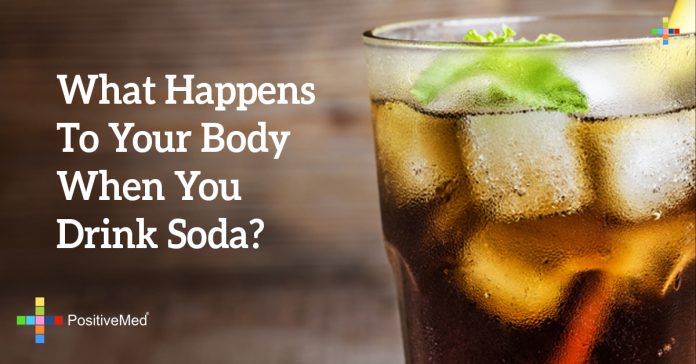 What Happens To Your Body When You Drink Soda?

Over the last several decades, drinking soda has become a universal habit that is seen throughout the world and spans every culture and socioeconomic level. Many studies have found that ingesting excessive amounts of soft drink beverages can result in long-term health problems.

Soft drinks are loaded with sugar, in fact, drinking just one can of soda exceeds the recommended daily amount of carbohydrates for an entire day. On its own, sugar contains about half the calories as fat per gram, but when excessive amounts are consumed, the body converts sugars into fat. When people consume a can or more a day of soft drinks, they are adding an excessive amount of sugar to a diet that already contains an indeterminate amount of carbohydrates.

Recent studies have shown that individuals who regularly drink sodas are 61% more likely to suffer from heart maladies than their counterparts who rarely indulge in fizzy drinks. The long term vascular changes from consuming soft drinks are caused by caffeine and its dehydrating effect which results in an increase in blood pressure and heart rate.

Research has linked moderate to high soda consumption with the development of metabolic syndrome, a condition marked by increased abdominal girth, hyperglycemia, hypertension and low HDL cholesterol. The cocktail of ingredients found in soft drinks such as sugar, caffeine, carbonation, preservatives, and artificial sweeteners set the stage for creating an unhealthy reaction in the body. Individuals suffering from metabolic syndrome have a higher likelihood to experience:

Drinking soda is associated with an increase in tooth decay, whether the soft drink contains sugar or artificial sweeteners. The beverages create acidic conditions in the mouth that make the teeth more susceptible to the damaging effects of sugar that result in cavities.

A recent study found that women who consumed two or more diet soft drinks per day were at risk from suffering kidney disease caused by the damaging effects of artificial sweeteners. Women who drank sodas sweetened by sugar did not have an increase in kidney problems.