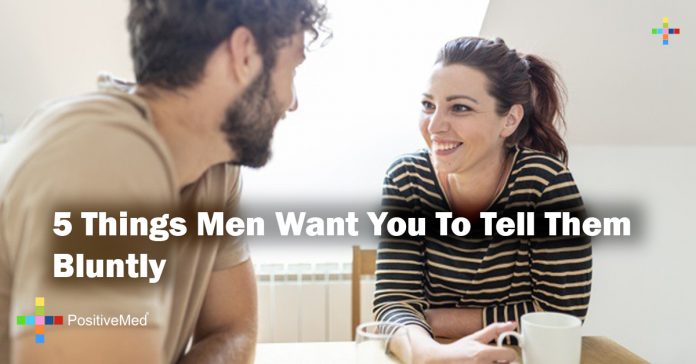 5 Things Men Want You To Tell Them Bluntly

Sometimes, women can be very subtle, but is that really what a man wants? Of course not! Men prefer their women to be blunt with them, but there are a few main things that they really want them to be blunt about. So to learn how to please your man better, read on.

When it comes to closeness, men always want open communication. If they’re doing something wrong, they want to be told bluntly so that they can fix it. Your man wants to please you; let him!  Men can’t read your mind, so be as open and communicative as possible about what you like and what you don’t like.

2. What Gifts You Want

You don’t have to completely spoil the surprise, but men like to be given hints about what you want for your birthday, Christmas, and other holidays. Simply stating something general and letting him figure out the specifics will work well for both of you. He won’t have to guess what you like and you’ll get gifts you will really appreciate.

Men have a hard time picking up on when you’re angry, especially if you’re acting like you’re not. Unless you want to just let it all slide, you need to tell your man that you’re angry. Men wear anger on their sleeve and expect their women to also display their anger in more obvious ways.  Don’t hide your angry feelings.

4. What Your Plans Are

Men are just as eager to find somebody that they can spend the rest of their lives with as women are. They don’t want you to wait until you’re well into the relationship to tell them what you want in life, such as how many kids you want and where you want to live. Be up front and, in return, you’ll find out your compatibility before you get too far into the relationship.  If you want a casual or serious relationship with a man, you should make your intentions known to the guy as well.

5. What You’re Worried About

It isn’t fun telling your partner about your concerns, but if the relationship is going to survive, it’s a must. Being blunt about the bad things between the two of you will be what builds a lasting relationship. This is all about being as obvious as possible about your concerns because your man won’t be able to guess what’s going on inside your head.

Being blunt isn’t always the easiest thing to do, but it’s necessary to maintain a healthy relationship. Doing these things will put you in the arms of your soulmate in no time at all.