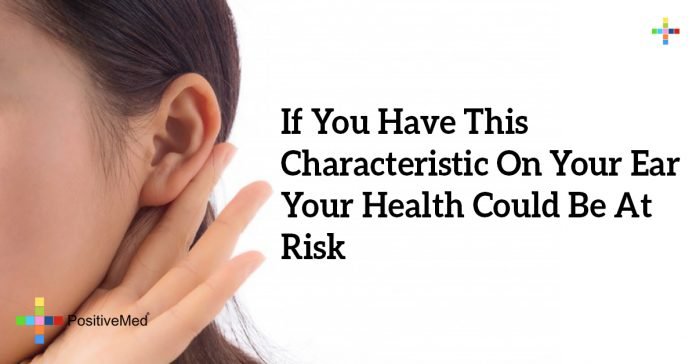 Certain random symptoms can often be a sign of a much bigger issue. A small difference in a person’s earlobe can actually be a sign that they are at risk for dangerous cardiac issues. Frank’s sign is the medical name for having a certain ear characteristic that has been related to patients with cardiovascular disease and atherosclerosis.

What Is Frank’s Sign?
Frank’s sign is named after Dr. Sanders T. Frank, a pulmonologist who first noticed the characteristic. Frank’s sign is a diagonal crease that runs from tragus to the back edge of the ear lobe. It is natural for the ears to sag or wrinkle as a person ages, especially if a person has an ear piercing, but Frank’s sign is always a deep line that runs diagonally from the front and top of the fleshy earlobe to the back and bottom of the lobe. Dr. Frank noticed that patients who had this diagonal earlobe crease were very likely to later develop heart disease.

What Can Happen If You Have an Earlobe Crease?
If you have an earlobe crease, you are at risk for developing heart disease. Several studies have shown that there is a link between the two conditions. In both 2006 and 2012, people who did not have any sort of symptoms of coronary artery disease were studied. These studies revealed that roughly 80% of subjects with Frank’s sign were in the early stages of coronary artery disease, which is usually undetectable. A 1989 study in the British Heart Journal studied subjects who had died due to cardiovascular disease. 72% of the people who had died because of heart disease had an earlobe crease.

RELATED ARTICLE: Do You Have Letter “M” On Your Palm? – Congrats, You’re Very Special!

What Is the Link Between an Earlobe Crease and Heart Disease?
There are many theories for why this relation between heart disease and an earlobe crease exists. Earlobe creases can be a genetic trait. Since heart and artery disease is also somewhat hereditary, it may just be that a person’s ancestors can pass on both Frank’s sign and cardiovascular problems. An earlobe crease is caused due to elastic tissue and small blood vessels around the earlobes degenerating. Therefore, it could be an early warning sign for the blood vessel degeneration that is associated with heart issues.

What Should You Do If You Have Frank’s Sign?
If you notice that you have developed an earlobe crease, you should mention it to your doctor. Plenty of studies have shown that there is a connection between heart disease and earlobe creases, so it could be potentially life-saving to begin monitoring your heart health. Early detection is crucial to managing heart problems before they become worse. If you have Frank’s sign, maintaining low cholesterol and blood pressure levels can help to ensure that your heart remains healthy, even though you might have a higher risk for heart and artery diseases.