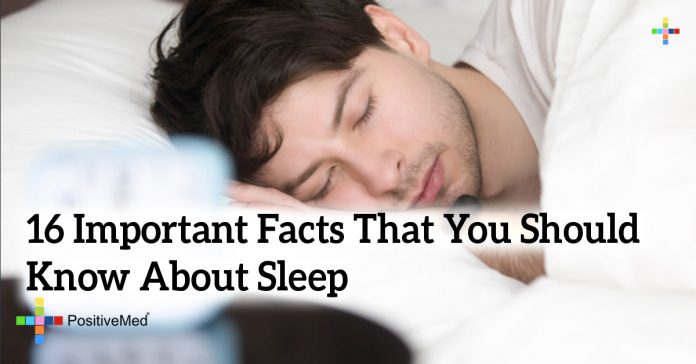 16 Important Facts That You Should Know About Sleep

Sleep has always been a subject of great mystery and fascination. Everyone in the world does it, but everyone does it differently. For some, it’s the easiest thing in the world while for others, it causes nothing but problems. Either way, it’s a universal thing but there are many facts that not everybody knows! Here’s a list of a few of the mind blowing facts.

Considering that you can die from sleep deprivation after 10 days, you can only imagine what this person was going through! They may have been suffering from symptoms such as decreased impairment, loss of memory, and huge increased chance for accidents. If you’re not sleeping for this long, you most definitely have a poor quality of life!

2. There are two period for maximum sleepiness.

A person will die without food after 2 weeks, but it only takes 10 days to die without sleep. So if you have a choice between sleeping or getting something to eat, get some sleep!

4. Dreaming used to happen predominantly in black and white.

Sleep will always be somewhat of a mystery to many of us. Although we’re learning more and more through research, it’s hard to study something that only happens when people are unconscious. But love it or hate it, you’ll be doing it for the rest of your life!