Get Rid of Your Beauty Marks With These Mole Removal Remedies 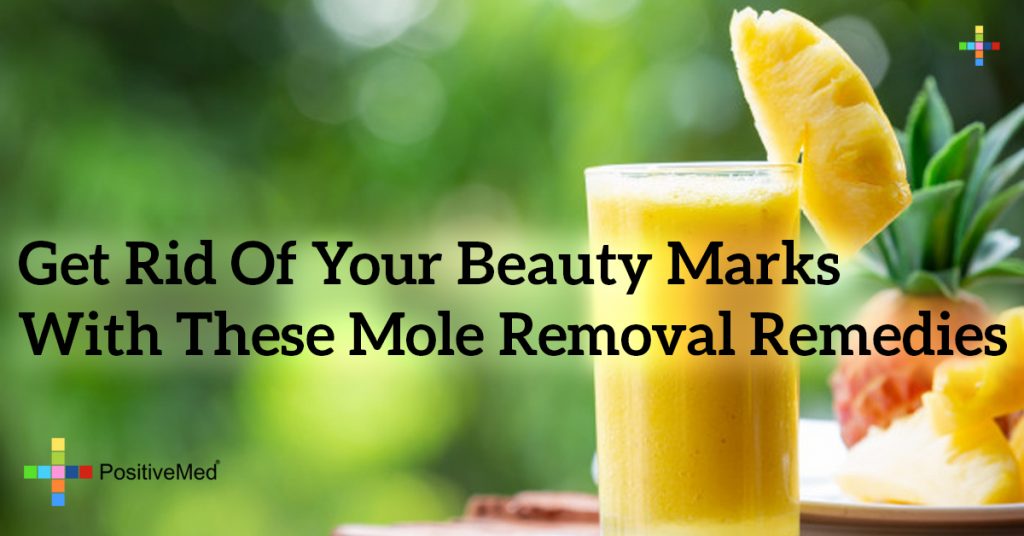 Get Rid of Your Beauty Marks With These Mole Removal Remedies

[nextpage title=”…”]
Though sometimes called “beauty marks”, moles are normal, healthy growths on the skin. Normally, they have an even brown pigment to them, and they can occur all over the body. Sun exposure can cause a person to have more of them on areas exposed during time outdoors. Their size can vary, but most of them are fairly small. Occasionally, a non-cancerous mole will grow to be larger and more predominant. This can be a source of embarrassment if it occurs on a part of the body that is noticeable, such as the face.

For a more flawless, attractive appearance, people who have large moles often consider having them removed surgically. Surgery is expensive though, and it has several drawbacks to it. Though moles are superficial, they will grow back if they don’t get completely removed, which means a dermatologist has to cut fairly deep into the skin to be sure that they get all of it. This creates an even more obvious “dent” in the skin where the mole used to be. As the wound heals, it will fill-in some but not all the way. So, instead of dealing with a mole, the person has a scar instead.

Also, the local anesthesia that is required with mole removal does not always affect people very well. It can cause a dangerous drop in blood pressure for heart patients. Others get dizzy and confused because of it. If a person has a weakened immune system, the surgery can put them at risk for infections at the wound site too. For this reason, those who do not heal well, like diabetes patients, are often advised not to have this medically unnecessary procedure done.

If unsightly moles are affecting someone’s self-esteem, they might become desperate to try unsafe removal methods. This isn’t necessary though because there are actually eight safe and effective natural remedies that can make large moles shrink and become less noticeable. And best of all, they cost only pennies, and all of them can be done in the comfort of your own home.

When the body’s immune system is stimulated at a point of injury, it quickly responds to the source of “danger” as a defense mechanism. Moles are not considered dangerous by the body if they are non-cancerous though. So, to trick the immune system into helping to get rid of them, you can use products that are mildly acidic in nature. By applying them to the mole, they cause enough irritation that the immune system is triggered to heal at that location. One of the best examples of this is the use of apple cider vinegar. Its astringent properties make it effective at drying up and healing moles. In some cases, it can even make the mole completely fall off.

Fruit juices, such as apple or pineapple, are a little more mild than apple cider vinegar, but in a pinch, they will work the same way. Use an adhesive bandage to fix a cotton ball soaked in a little of the juice over the mole while you sleep. Don’t oversaturate the cotton ball though, or it might fall off.

RELATED ARTICLE: Moles: What They Are & What To Do About Them

Another mole remedy is honey. It isn’t acidic, but it has natural antibacterial healing properties have been known about for many years. It beautifies the skin so well that even Cleopatra was known to mix it with milk to keep her skin flawless. When it is dabbed on to moles, the results are slow but amazing.

Salt works to remove moles by drying them up. It doesn’t stay in place easily though, so it helps to add it to a bit of castor oil before you dab it on. Salt can be excessively drying to the skin, so don’t over apply it.

If you don’t mind the odor, tea tree oil can make moles disappear within a matter of weeks. Most people who have tried this remedy have reported that the mole fell off easily and painlessly while leaving the skin soft and smooth underneath.

Some people swear by using baking soda and castor oil together to get rid of moles. Simply scrub the mole with a clean wash cloth to irritate the surface then apply the mixture. Do this several times a day for the fastest results.

The last two remedies are a little unusual, but they work. Garlic paste and banana peels both have healing properties that make them very beneficial to the skin. Apply either of them about three times a day.

If you have any moles that are bleeding, asymmetrical, or larger than a few millimeters, please see a dermatologist to make sure that they are not cancerous.