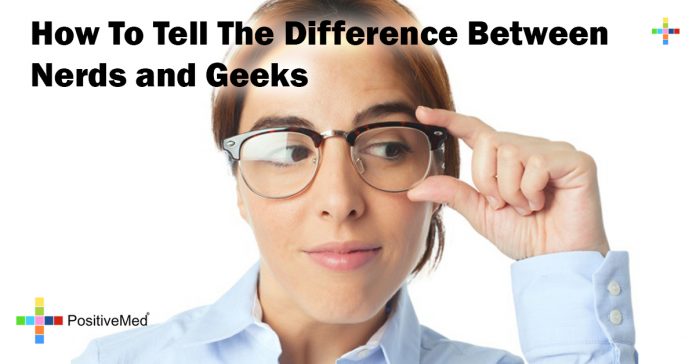 How To Tell The Difference Between Nerds and Geeks

Nerds and geeks, geeks and nerds. To the average Joe, maybe the two words mean the same thing. After all, nerds and geeks may have sat with one another at the lunch table during high school, or they may have even played the same instrument in marching band. However, if you ask either a nerd or a geek, they’ll both be sure to tell you that they don’t want to be classified with the other. After all, geeks and nerds are proud of who they are, and they don’t want to be misclassified for something they are.

A Geek Knows Everything

The biggest thing to keep in mind about geeks is that they know everything about the topics that interest them. They may not have a clue as to who won the Super Bowl last year or what song is at the top of the Hot 100 charts. However, if you ask them what the square root of pi is, or to speak to you in Klingon, they’ll surely be able to impress you with their geeky knowledge.

A Nerd Doesn’t Care If You Notice They Know Everything

Nerds are equally as smart as geeks, though it’s often that their interest levels in things are not based off the perception of society. Nerds are known for being introverted and quiet, but also motivated and dedicated to their objective. As the old saying goes, “nerd may be a four-letter word, but it often comes with a six-figure income.”

How Do They Communicate

One of the easiest ways to spot the difference between a geek and a nerd is to take a look at how they communicate with others. In doing so, you’ll find plenty of signs that’ll help you make the classification.

Geeks typically find niches to be interested in that involve social activities. For example, a nerd may have a favorite film director or musician, which means they’ll go to festivals where they’ll mingle with other people. On the other hand, nerds typically prefer to spend their time getting interested in independent tasks, such as playing World Of Warcraft or other MMO games online.

Find Where They Work

Finally, take a look at where the person works if you are trying to determine whether they are a nerd or a geek. Geeks typically end up in more artistic professions where they can articulate to the world their vision on art and design. On the other hand, nerds prefer more intricate jobs that may never get them any success. For example, there are plenty of nerds who are rocket scientists or computer programmers who never step out from behind the computer.

Both nerds and geeks need their place in society. But in order to keep things balanced, it’s important to know how to classify each. If we don’t, we could be looking at revenge of the geeks and nerds, and it’s likely that we’d be in trouble since they have more brainpower than the rest of us.