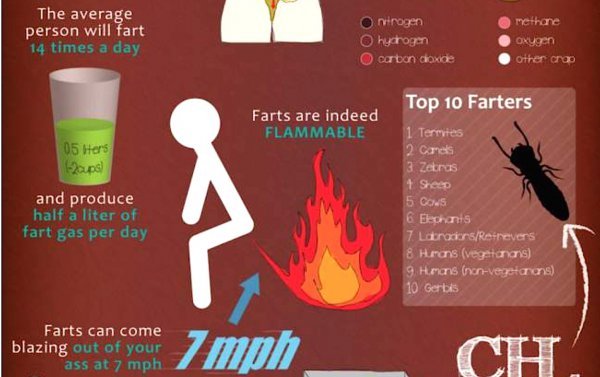 10 Facts You Don’t Know About Your Farts

Farting is a normal part of life and is often experienced on a daily basis for most people. Although farts are not always the most pleasant to smell for other people in the room, it’s a natural and healthy way for the body to function. Although you may be accustomed to your own farts, there are a number of facts that you may not be aware of.

1. Certain Foods Cause Farts to Smell

Specific foods like meat or eggs are known to increase the odor in gas due to the high levels of sulfur that they contain.

Farts have the capability of lighting a flame, which will turn the flame blue if you actually try it.

3. The Sound of Farts is Determined By Muscles and Speed

Each fart often has a different sound if it’s not let out slowly, which is mainly due to muscles and the speed at which it’s released.

The average person releases gas 14 times per day, which equates to 17 quadrillion farts in a lifetime.

5. You’ll Fart After You Die

Deceased individuals are even known to fart up to three hours after their death from gas that continues to escape the digestive tract.

Although passing gas creates a bad smell, only one percent of the gas is what causes the odor due to sulfur in the body.

7. Women Fart Just as Much as Men

Men may be prone to rip several farts throughout the day, but women are just as gassy and release the same amount as the opposite gender.

8. Too Much Farting Can Be Due to a Lactose Intolerance

If you seem to fart multiple times each hour, it may be due to a lactose intolerance due to an inability to digest dairy and certain nutrients.

9. A Liter of Gas is Passed in Two Days

Gas is continuously being released from the body with an average of a liter passed every two days.

There’s a reason why you may smell a funky odor in the room even if someone is sitting on the other side. Gas travels at 10 feet per second for a smell that makes its presence known.