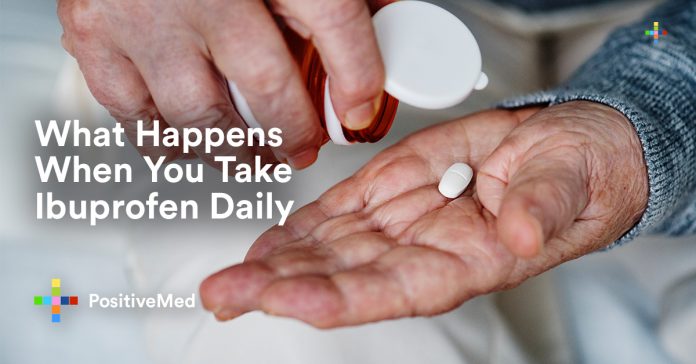 Sold under different brand names Motrin, Ibuprin, and Advil, Ibuprofen is a drug used to relieve inflammation, swelling, and pain. It belongs to a group of drugs known as non-steroidal anti-inflammatory drugs (NSAIDs). You can purchase Advil or Motrin over-the-counter in 200mg tablets although higher doses require a prescription.
Most people tend to think that drugs that don’t need a prescription are safe for casual use. You can take ibuprofen to relieve pain without experiencing any harmful side effects. However, just like any other drug, taking ibuprofen on a daily basis can trigger some unpleasant side effects.

Limit Daily Use of Ibuprofen

According to Harrison Linder, MD, from the Center for Interventional Pain Medicine at Mercy Medical Center in Baltimore, ibuprofen daily use should not exceed 30 days. It is an easy to carry medicine that you can comfortably stash in your purse but should be used as recommended dosage amount and time span. Dosing can range from 400 mg to 800 mg up to four times a day. This means you are not supposed to take more than 3200 mg per day.

Dr. Linder says that exceeding the recommended dosage into your second or third month can cause negative effects that outweigh its desired benefits of decreased pain and discomfort.

Surprisingly, some people depend on ibuprofen as a reliable way to make it through the day. Dr. Linder notes that very often, people who engage in large amounts of physical activity, including athletes or people with occupations that demand physical strength rely on ibuprofen or other NSAIDs. This is in an attempt to limit daily pains and aches while they continue working.

Regrettably, you may feel an instant relief and manage to complete your training sessions but you may also be putting your body at risk along the way. Let’s have a look at all the important info you should know regarding ibuprofen and the most common physical side effects you might experience if you are taking too much.

Same with other NSAIDs, ibuprofen inhibits the role of an enzyme called cyclooxygenase (COX) which is responsible for the production of substances like thromboxanes, prostaglandins, and prostacyclins. These substances are vital in the normal function of cells. Ibuprofen limits the production of these compounds which can cause pain and inflammation.

Overuse Can Cause Stomach Problems

Excess amount can Cause Heart problems

End products produced by COX enzymes play a role in hemostasis and coagulation. This means they are vital in platelet aggregation following an injury or trauma. They help in blood clot formation which stops bleeding. According to Dr. Linder, overuse and long-term use of ibuprofen put patients at a higher risk of uncontrolled bleeding. Additionally, one may experience a rise in blood pressure after taking ibuprofen in excess.

Prostaglandins regulate the flow of blood into the kidneys. Abnormal amounts of prostaglandins make the renal blood vessel to constrict, decreasing the amount of blood flow, and increased pressure. Dr. Linder says this can cause acute renal failure in severe cases.

When You Should Not Use Ibuprofen

Ibuprofen should not be taken with alcohol as it can increase your risk for gastrointestinal bleeding.
You should also not use ibuprofen after a rigorous workout when your body is dehydrated. It can make you vulnerable to renal kidney failure.

Pregnant women should limit their ibuprofen intake, especially during the third trimester. It can put the bay at an increased risk of heart and lung conditions.