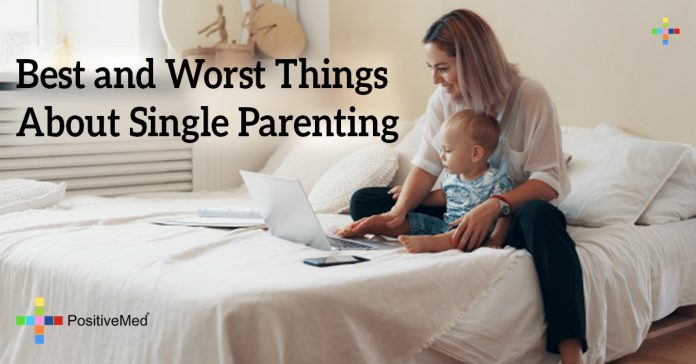 Best and Worst Things about Single Parenting
By PositiveMed-Team
Edited By: Stephanie Dawson

One of the best things is that a single parent does not have to answer to another adult about what they and kids do. They can go wherever they want and do whatever they want to without giving any explanations as there isn’t another partner to question.

2. Making your own decisions

3. No mood swings to deal with other than their children’s and their own

It is not uncommon to see clashes between parents in a household which can cause unrest in a child’s mind. Being a single parent relieves you of this tension.

4. When people comment on how well mannered/lovely your child is, you know that is all because of you

You can rest assured that all the credit for your child’s good behavior is yours.

5. Getting all of my child’s love and affection

As a single parent you are everything to your child. You get all the love and affection of your child alone, which otherwise might have been divided between you and your partner.

Being a single parent is a huge responsibility, any decision that you make, good or bad, has to be owned by you. You need to be careful making decisions as one wrong decision can be dangerous.

The child depends on one parent in a single-parent home. If a single parent struggles, the child gets a sense of the situation no matter how the parent tries to adapt. This creates fearful times for the child and may have a negative impact on their life as well.

3. The child doesn’t have a second parent to turn to in need

At times the single parent may be busy with something else in their life and the child may need a second parent. This can be a major problem for the child.

4. Importance of superficial relationships is generally not recognized by a single parent

Children can value superficial relationships in a needy single-parent family. However, the single parent generally tends to ignore this when changes have to be made. Children can be hurt easily in these scenarios.

5. Child’s experiences are much healthier in a two-parent family