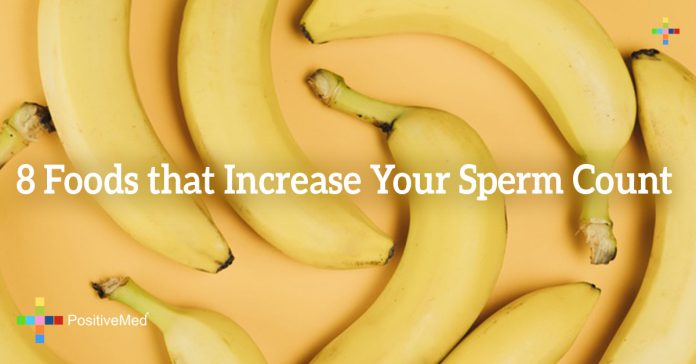 8 Foods that Increase Your Sperm Count

The sperm Count is one of the most important characteristics in male fertility. Research shows that, in more than half of infertility issues in couples, low sperm count is the cause. According to the World Health Organization, sperm counts of more than 15 million sperm cells per milliliter are considered normal. In a semen analysis, which is a test for sperm quantity and quality in order to find the underlying cause of male infertility, the following parameters are measured: sperm count, sperm motility, sperm morphology, volume, fructose level, and pH.

Several environmental, lifestyle and medical causes can lower the sperm count significantly.
Here is a list of the most common causes of low sperm count:

Bananas are effective at increasing sperm count, since they contain a rare enzyme called Bromelain. Bromelain is also found in pineapples, and mostly in their stem. Bromelain is a natural anti-inflammatory enzyme, which also boosts greater production of the male sex hormone, testosterone (Source: Dr. Oz).

Bananas are also a rich source of vitamins B1, A, and C. These essential vitamins help the body enhance its sperm-producing ability and increases stamina significantly.

Dark chocolate is not just used in seduction, but it also has enormous health benefits. According to a research study published in the Journal of the American Dietetic Association, dark chocolate can increase the feeling of attraction between two people by releasing the same endorphins that are secreted during lovemaking.

L-arginine is also known to improve the dilation of blood vessels, which increases blood flow to the genitals. This can actually help the penis to enlarge. That’s the reason why men who consume dark chocolate every day have reportedly stronger and more intense satisfaction peaks. You can take L-arginine supplements but dark chocolate is tastier and will do the trick naturally.

Garlic has the ability to increase blood flow in the body. Garlic contains a chemical called allicin. Allicin is responsible for many of garlic’s amazing health benefits, including its antimicrobial, and anti-hypertension properties. This compound prevents plaques from building up in the arteries and enhances blood flow to the genital area, which increases the production of sperm. Garlic also contains nitric oxide synthase, or NOS, which plays an important role in a healthy erection. Garlic provides the body with selenium and vitamin B6, which are responsible for the mechanism of healthy sperm production.

Pomegranates are useful in problems ranging from cold and flu to low sperm count. Pomegranates contain anti-oxidants that fight a chemical in the blood which destroys sperm. This chemical is known as malondialdehyde (MDA). Malondialdehyde is also found in the semen and is associated with low sperm quality. A new study published in the International Journal of Medical Research and Health Sciences (2013) shows that smoking increases the levels of MDA in semen and lower the sperm count in semen.

If you’re vegetarian like me, don’t worry! There are plenty of vegetarian and vegan foods that are abundant sources of zinc.

Please make sure to check out Top 10 Signs of Zinc Deficiency.

As mentioned earlier, walnuts contain arginine, which helps in the increased production of sperm and also boosts semen volume. Walnuts also contain Omega-3 fatty acids, which help increase blood flow to the penis. They also possess twice the antioxidant power of other nuts. An amazing fact about walnuts is that having 7 walnuts a day lowers cholesterol and the risk of heart attack. These positive effects collectively indicate that walnuts are something you should have in your diet every day.

Fruits like oranges, strawberries, cherries, and other antioxidant-rich fruits are effective in boosting sperm count and preventing damage to sperm. Eating a fruit salad helps you absorb all the nutrients of fruits at one time. By making eating fruits a habit, it can help counteract free radical damage to sperm cells. The semen of men who take up to 1000 milligrams of vitamin C daily has less clumping than that of their deficient counterparts. This means that vitamin C can both increase sperm motility and the chances of fertilization.

The simplest way to improve your sperm count is to drink ample amounts of water each day. This is necessary to keep your body hydrated in order to boost the functioning of cells, including sperm. Drinking 8 to 10 glasses of water a day can help your sperm to go a long way.

In the end, this video summarizes some effective changes in your lifestyle that can boost your fertility:

View How to Increase Your Sperm Count on Howcast