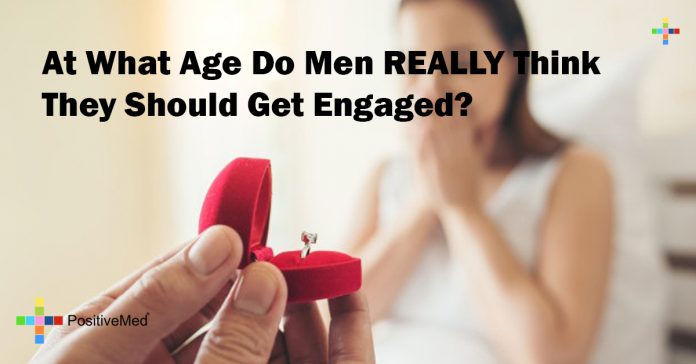 At What Age Do Men REALLY Think They Should Get Engaged?

We’ve all heard exaggerated tales of the female biological clock, the inner alarm system that supposedly triggers when a woman starts to fear that the end is near for her childbearing years. But it turns out that women aren’t the only ones who have a sense of urgency when it comes to marriage! A recent poll conducted by Marie Claire reflected some very interesting views when it came to the male of the species…and when men think is the best time to propose to a special lady. A lot of the feedback may be very unexpected to some. Here are some of the most interesting findings.

Men in their early twenties are surprisingly willing to commit.

Perhaps we ought to reevaluate the whole stereotype of young men as post-collegiate, beer swilling lotharios. Provided that they met the right woman, it turns out that men in their early twenties were more eager to put a ring on it than almost any other age category.

Men in their mid-twenties comprise one of the most cautious groups.

Once men hit the middle of their roaring twenties, however, reality intervenes and makes them much more cautious about settling down with the right woman. Men in this age group were far more likely to consider a longer courtship, even wanting to date a woman for up to six years before getting down on one knee.

Men in their late twenties know what they want.

Perhaps it’s because of the impending “dirty thirty,” but men in their late twenties are enthusiastic about making honest women out of their girlfriends. This group reported more confidence in their decision-making process when it came to settling down. After being around the block a few times, they know what they want in a long-term relationship.

Guys in their early thirties tend to be super ready to commit.

Maybe it’s the fact that their Facebook feed has been inundated with marriage and baby posts, but this group seems very apt to propose to the right woman. Some of them said that they’d even consider getting engaged within six months if the relationship seemed to be progressing well.

Once they hit their early thirties, men are more likely to wait awhile before proposing.
And they say women are fickle! Once a man gets into his mid-thirties, he reverts back to being more cautious about a proposal.

So…what have we learned about a man’s likelihood to commit at various ages? For whatever reason, men in the early years of their twentieth and thirtieth decades were more likely to become serious suitors. However, while the statistics indicate that some age groups are more willing to commit than others, matters of the heart are difficult to predict with just numbers!