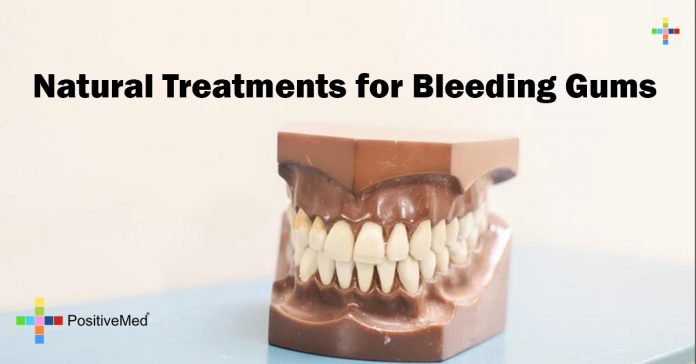 Bleeding gums are a result of swollen gums, and often start bleeding during brushing or eating rough food. The primary cause is poor hygiene, but it can also indicate several health conditions including pregnancy, vitamin deficiency, scurvy, leukemia, or another infection.

It can be treated and prevented naturally, use the following home remedies to improve your dental condition within weeks.

Citrus Fruits:  Oranges, grapefruit, and lemons, as well as vegetables like broccoli and cabbage, can prevent bleeding gums by providing adequate vitamin C since deficiency of this vitamin is a primary cause of bleeding gums.

Milk:  Calcium constantly needs to be replenished to strengthen your gums, milk or other calcium-rich foods should be enjoyed on a regular basis for the prevention of bleeding gums.

Cranberry and Wheatgrass Juice: These juices have antibacterial properties to cleanse the gums of bacteria, and can give relief to those with bleeding gums.

Baking Soda: Baking soda kills bacteria by making the micro-environment in the mouth alkaline, and can be applied directly to the gums with your fingers.

Sage and Peppermint oil or calendula leaf and chamomile tea: Can be used to maintain mouth freshness and give relief from bleeding gums.

Saline: Gargling is helpful for a sore mouth.

Finally, avoid fatty foods and smoking: they make the condition of the mouth anaerobic, promoting the growth of certain bacteria.