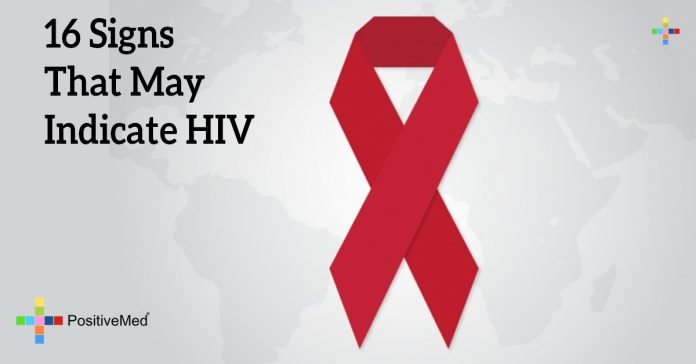 16 Signs That May Indicate HIV

Within a month or two of HIV entering the body, 40% to 90% of people experience flulike symptoms known as acute retroviral syndrome (ARS). Here are 16 signs that you may be HIV-positive:

Fever
One of the first signs of ARS can be a mild fever, up to about 102 degrees F and is often accompanied by other usually mild symptoms, such as fatigue, swollen lymph glands, and a sore throat.

Fatigue
The inflammatory response generated by your besieged immune system also can cause you to feel tired and lethargic. Fatigue can be both an early and later sign of HIV.

Achy muscles, joint pain, swollen lymph nodes
ARS is often mistaken for the flu, mononucleosis, or another viral infection, even syphilis or hepatitis.

Skin rash
Skin rashes can occur early or late in the course of HIV/AIDS.

Nausea, vomiting, diarrhea
Anywhere from 30% to 60% of people have short-term nausea, vomiting, or diarrhea in the early stages of HIV, these symptoms can also appear as a result of antiretroviral therapy and later in the infection, usually as the result of an opportunistic infection.

Weight loss
Weight loss is a sign of more advanced illness and could be due in part to severe diarrhea.
A person is considered to have wasting syndrome if they lose 10% or more of their body weight and have had diarrhea or weakness and fever for more than 30 days.

Dry cough
A dry cough that goes on for weeks and doesn’t seem to resolve.

Pneumonia
A serious infection caused by a germ that wouldn’t bother you if your immune system was working properly.
Other opportunistic infections include toxoplasmosis, a parasitic infection that affects the brain; a type of herpes virus called cytomegalovirus; and yeast infections such as thrush.

Night sweats
These can be even more common later in infection and aren’t related to exercise or the temperature of the room.

Nail changes
Nails change such as clubbing (thickening and curving of the nails), splitting of the nails, or discoloration (black or brown lines going either vertically or horizontally) due to fungal infection.

Yeast infections
Thrush, a mouth infection caused by Candida, a type of yeast.

Cold sores or genital herpes
Having herpes can also be a risk factor for contracting HIV. This is because genital herpes can cause ulcers that make it easier for HIV to enter the body during closeness.

Tingling and weakness
This is called peripheral neuropathy, which also occurs in people with uncontrolled diabetes.