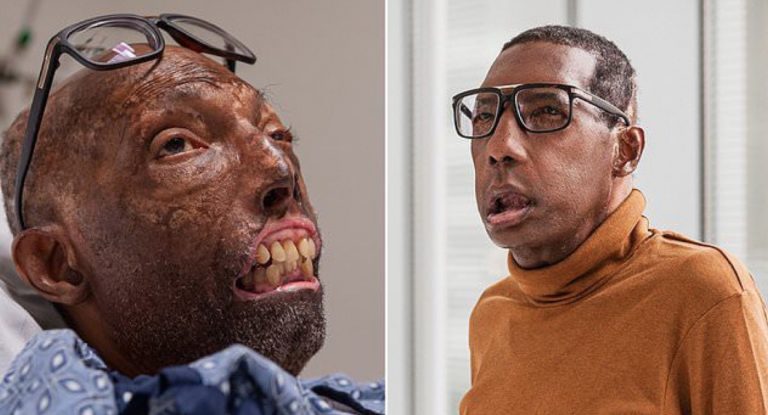 Robert Chelsea was 68 years old when a drunk driver hit his car as he was on his way home from a church near Los Angeles, California. The accident caused an explosion that left him with third-degree burns over 60 percent of his body and face. It also disfigured his face, leaving him with no lips, no left ear, and he lost much of his nose. That was in 2013. Six years later, in July of 2019, this father became the first black man to get a face transplant.

Months in the hospital and over 30 surgeries were just the beginning. The damage to his face had devastating impacts on his life.

“You have no idea what it’s like to speak to a customer, friend, or a loved one when your lips and tongue have been burned,” he said. “Despite their best efforts to hide their instinctive reactions, I can feel their discomfort, and there is nothing I can do. My business fell apart because of it, and many of my friends drifted away.”

The search for a face donor took years. Finding a compatible organ and tissue donor is always difficult. Cases like this are even harder because organ donation registration excludes face donation. Face donation requires special permission from the family of the donor. It is also a medically complex type of transplant.

According to Johns Hopkins Medicine, a face transplant involves skin, muscle, and bone. A face donor must be a match in blood and tissue type, skin color and tone, gender, ethnicity, and face size. For a black man, finding a face donor is a real challenge.

In 2018, Chelsea turned down the first donor match because the skin tone was not a match. He finally got a phone call through the Gift of Life Donor Program about a compatible donor in 2019. In July, a team of 40 doctors and nurses performed the 16-hour surgery to give him a new face.

Chelsea’s story points to a longstanding and often heartbreaking reality: the overall shortage of organ and tissue donors and specifically black donor matches.

There have been 20 face transplants worldwide since the first in 2005. Robert Chelsea is the first black man, and the oldest, to undergo this procedure. Greater awareness about organ donation challenges and his success story light the way to the future.