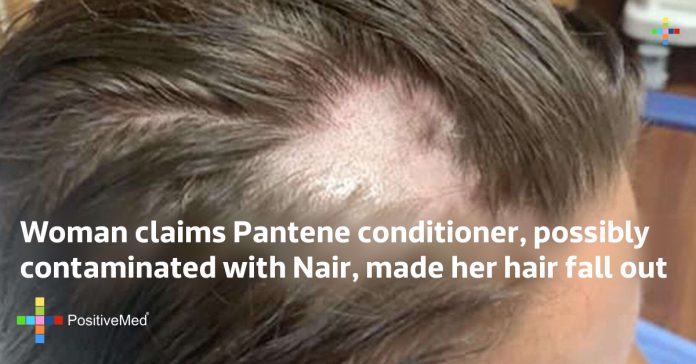 Most of us shop for drugstore or department store beauty products. Take shampoo and conditioner, for instance. A Wisconsin woman says her hair began falling out after using Pantene conditioner from Walmart. She claims it must have been tampered with and contaminated with Nair. Nair is a famous hair removal lotion. Could her story be true? Could the mixture have caused hair fall out?

Ashley Rose Robinson of New Richmond was applying conditioner to her hair one Sunday evening as she always does. She had purchased Pantene Pro-V Sheer Volume conditioner at a Wisconsin Walmart. The 21-year-old began crying in disbelief as her hair began falling out in clumps in the shower. The photos here tell the story.

Ashley’s mom, Taffy Jo Timm, confirmed her daughter’s allegations. They believe that the Pantene conditioner was somehow mixed and contaminated with Nair. They blame that someone in Walmart had tampered with the conditioner. The women said that the botched conditioner that caused the hair to fall out was pink and odorous. That is the color of Nair hair removal lotion, and it has a pungent smell.

Nair is sold as a hair remover for the legs and underarms.

Robinson says it was a horrific experience to see her long brunette locks lying on the shower floor. It’s been a raw event, and she could not stop crying. She hurried to the emergency room for help. There wasn’t any chemical burn on her scalp, but it was red and inflamed.

Ashley Rose Robinson has since shaved her head because of the damage. Wisconsin Police are investigating the incident, and Walmart is cooperating.

Robinson told police that she used the Pantene conditioner on July 28th and had purchased it a week earlier. A representative of Walmart reported that store officials had reviewed relevant surveillance footage. The representative indicated that there was “no evidence of tampering.”

There is a Go Fund Me page that has been set up on behalf of Robinson. There is a $5,000 goal, and thus far, more than $1,600 has been raised. The money will be used to buy wigs until her hair grows back in. The funds will also offset any medical expenses or legal fees that may arise.

Robinson could not have hair extensions put in after the hair fall out. She was hoping the extensions could hide the bald spots. Stylists told her it wouldn’t work and would put tension on the remaining hair. That is when the woman had her head shaved.

Taffy Jo Timm’s Facebook page is no longer available. On it, she had included several photos taken of her daughter’s hair clumps in the shower. Some people have been quick to disbelieve Ashley Rose Robinson’s story and the alleged conditioner contaminated with Nair’s story.

Robinson maintains her innocence, and Wisconsin Police continue to investigate the heartbreaking allegations of the young woman. It’s difficult for any person to suddenly lose major portions of their hair and to read hurtful comments across social media.