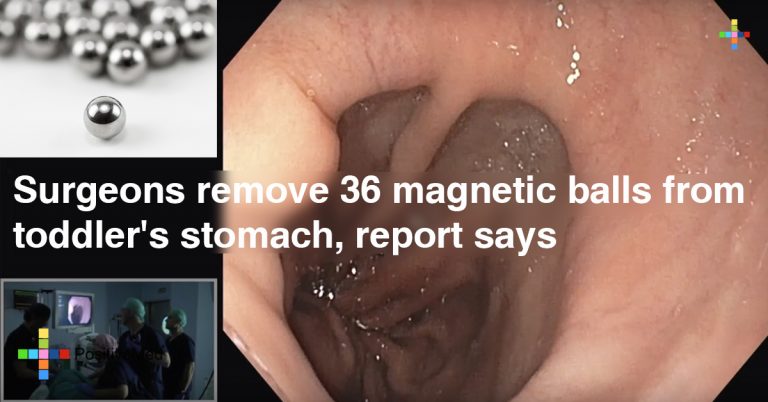 A parent’s worst nightmare is that her baby would be hurt or swallow magnetic balls something that is harmful when they turn their backs even for a moment. Nobody can watch their children every minute of the day. Mothers are busy, and sometimes accidents happen. Here is a toddler who swallowed 36 magnetic balls over a period of time, so it would have been difficult for her parents to have seen her doing it.

Asiawire reports that when the little girl started having severe stomach pain, high fever and repeated vomiting, her parents took her to a local clinic in east China. After an x-ray showed the metal balls in her stomach, she was transferred to the Second Affiliated Hospital of Wenzhou Medical University in Wenzhou, in the Zhejiang Province. After an hour-long surgery, surgeons removed all of the multi-colored balls, but the child is still in recovery. She is suffering from two holes that were made in her intestines by the toxic metal.

If that wasn’t terrifying enough, the x-ray showed that the 36 multi-colored, magnetic balls had become attached by the fluids in the digestive system. The little girl could never have swallowed a chain of beads! No, she was interested in them, so she swallowed each one because they looked like food. They were pretty, small, smooth and round and looked like grapes. When children play with toys like these, carefully supervise them to prevent any accidents.

The digestive fluids in her system caused the magnetic balls to adhere to one another and form a chain. This incident occurred in Asia but could easily have happened anywhere. The one-year-old picked up the 36 balls, and one by one, she swallowed them. Both the parents and the medical staff were astonished but relieved that they were all removed.

Small children learn about the world around them by touching and by putting things in their mouths. Have you noticed this with your little ones? They do this as toddlers until they are told hundreds, if not thousands of times not to put them into their mouths. Only good food is supposed to be put in your mouth. Typically, children up to age three are guilty of this method of basic investigation and learning. This one-year-old little girl was not old enough to know that these metal beads weren’t good for her. She must have liked the way they felt in her mouth, so she kept eating them. Toddlers must be repeatedly told until they learn.

The surgeons began operating as soon as she was admitted, but the human body can’t digest materials that are toxic. If you suspect that your child has ingested something that is foreign like this because they are showing physical symptoms such as severe stomach pain or vomiting, and you don’t know the reason why this is happening, take the child to your local clinic or hospital for an x-ray as soon as possible. Parents love their children, and this attention to their physical needs will prevent more serious injuries from occurring.