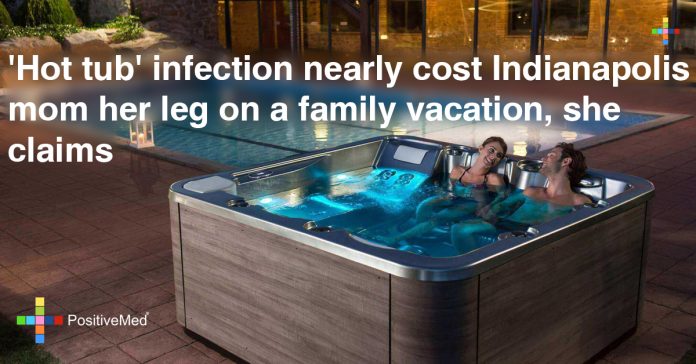 Indianapolis resident Taylor Bryant was vacationing in Pigeon Forge, Tennessee, last spring, having relaxed in a hot tub one afternoon. Later that day, the mother of two felt cramping in her right calf, prompting a visit to an emergency clinic.

Bryant, 26, was then hospitalized in Indianapolis for a blistering, oozing rash on her blue-black leg. The pain, she said in the July People magazine, was “worse than labor.”

Intravenous antibiotics stemmed from the infection, and Bryant has her limb and is back at work. But doctors had seriously entertained amputation in the face of her cellulitis, a potentially life-threatening bacterial skin infection.

“[Hearing that I might be] losing my leg, I instantly started crying,” Bryant recalled. “It scared me to think that could happen so young.”

The CDC’s National Outbreak Reporting System said from 2009 to 2017, nine states reported 25 outbreaks of the rash. All the cases were thought to be caused by Pseudomonas.

Between two and 26 people were impacted in each outbreak. No hospitalizations or deaths were reported.

“People can get a very mild skin infection related to the bacteria,” Bogoch said. “Some people might get a bit of an itchy rash, and sometimes the rash has drops of pus around hair follicles. The skin might be a little bit raised and can appear red. It’s mild, self-limiting, and goes away on its own, usually within a matter of a couple of days.”

Bryant wasn’t so lucky, and she now wears pressure socks on both legs. She noted that she has been in contact with the responsible Pigeon Forge hotel. She added that she can’t elaborate for legal reasons.

“I want people to see the chance they take in hot tubs,” Bryant told People. “This can be just from a break of skin, for example, shaving [your] legs [and] then getting in [a] tub.”

To reduce the risk of a crash, the CDC recommends using chlorine and other disinfectants in the area. It adds that the environment could render the detergents less effective. The warm water, it says, might break down their cleansing power.

It further recommends that users ensure the water’s pH levels have been checked at least twice a day. Hot tubs, it says should have a pH level of 7.2 to 7.8. If users find improper chlorine, bromine or pH levels, they are urged to tell the operator or owner immediately.