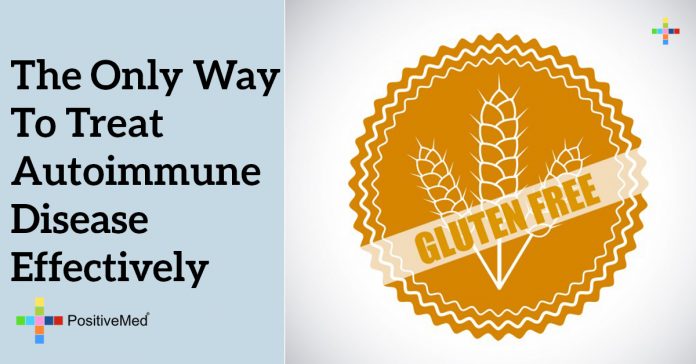 The National Institute of Health has declared that at least 23.5 million Americans currently suffer from an autoimmune disease. Autoimmune diseases such as Type 1 Diabetes, Arthritis, and Hashimoto’s Thyrioditis are on the rise, and many healthcare professionals are beginning to think that gluten may be the culprit. Some believe that with proper nutrition, an immune system shattered by the ill effects of gluten can be rebuilt.

Gluten is a protein that is naturally found in some grains. However, the gluten that is so omnipresent in our modern world is the product of made strains of wheat and isn’t like the natural protein. Gluten has even been added to products that did not contain this protein just a few decades ago. Gluten is obviously found in foods prepared with flour, but now it is used in supplements and even prescription medications. Many hygiene products like toothpaste and body lotion contain gluten.

What is an Autoimmune Disease?

Autoimmune disease such as lupus or multiple sclerosis develops when your immune system mistakenly attacks itself. White blood cells are efficient killers. When they go after viruses and foreign bodies, you will remain healthy because the threat has been taken care of. If you get an autoimmune disease, these same cells become programmed to kill healthy tissues. Then you will get sick.

How Does Gluten Cause Autoimmune Diseases?

Some people are very sensitive to gluten. They are so sensitive to it that when they consume gluten, the proteins travel to the intestines. Once there, the proteins release a chemical that allows the gluten to travel through the intestinal wall and into the bloodstream. This is known as leaky gut syndrome. A leaky gut allows the gluten to pass into the blood, along with bits of digested food and toxins. Your immune system goes into overdrive and starts attacking parts of the body that it shouldn’t.

A study published in Theropeudic Advancements in Gastroenterology found that in in one test population, 91% of of people diagnosed with an autoimmune disease were later diagnosed with Celiac’s disease, a syndrome affecting people who are gluten intolerant. Another study that took place in the year 2000 noted that exposure to gluten appears to make children more likely to develop autoimmune diseases. Many experts in the medical field have proposed a gluten-free diet as a way to prevent disease.

How Can I Start Eating Gluten-Free?

If you wish to stop eating gluten, you will have to remove ALL gluten from your diet. It takes three months for your immune system to repair itself after eliminating gluten. If you cheat, you are re-setting the clock for at least three more months. Pay attention to the labels on the foods you eat, and eat naturally gluten-free foods such as fruits and vegetables. If it’s hard for you to give up baking, choose gluten-free flour made from coconut or beans.

According to Dr. Amy Myers, it’s important to remain vigilant when on a gluten-free diet. Dr. Meyers reports that many patients believe that simply avoiding bread is enough. It isn’t. Gluten is found in condiments, hot dogs, and even toothpaste.

Going 100% gluten-free appears to be a great way to lessen your chances of disease. If you stick to your diet, your body will thank you. Please note that you should discuss major dietary changes with your doctor. If you are an insulin-dependent diabetic, it is especially important for you to discuses how a gluten-free diet could affect your health before you begin any diet program.