PositiveMed The Positive Side of Medicine
Home health “Face Mites” Live Inside Your Pores, Eat Grease and Mate On Your Face While You Sleep 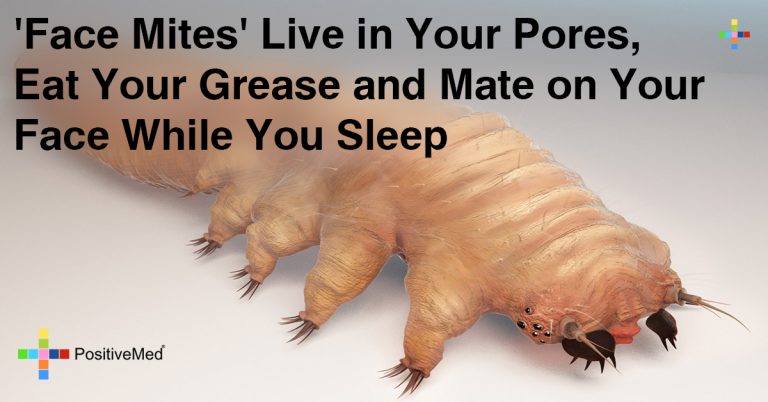 Gross but true
You have dozens of tiny arachnids living in your pores and silently pigging out on the grease and natural oils there. Still, don’t expect to wake up with special powers like some movie superhero. It’s not going to happen.

According to a recent video produced by the people at KQED in San Francisco, California, the arachnid class creatures in your face are not radioactive and almost everyone has them. More commonly known as face or eyelash mites (genus Demodex), they are over 0.01 inches (0.3 millimeters) long and transparent. They look like worms but are distant cousins of ticks and spiders. They live a quiet life deep within the facial pores of adult humans.

Blame your mom
While they are not initially found on babies, they can be passed on via motherly contact. The eight-legged microscopic creepy-crawlies reside close to the facial hair follicle roots in both males and females. Why do they homestead in such cramped quarters?

Sebum is produced by specific glands in your pores near the base of your hair follicles. Sleeping by day, these mini-mites burrow face-first into your greasy pores. At night, when you’re peacefully sleeping they crawl out of your pores and do the greasy bump-and-grind all over your face.

They are naturally attracted to the oiliest pores on your bodies such as your forehead, nose, and cheeks. In fact, a 1992 study published in the well-known journal “Clinical and Experimental Dermatology,” your infested follicles can actually house six mites at one time with room for the in-laws to boot. The typical face mite can live for approximately two weeks.

Good News?
These microscopic minibeasts generally pose no current threat to human beings. However, if they settle in significantly large numbers their presence can cause a disease known as demodectic mange or demodicosis. A dermatologist at the University of California, San Francisco named Kanade Shinkai, told NPR that demodicosis causes a white or red sheen to form on a person’s skin. This is frequently related to a decline in the person’s immune system response.

Shinkai also said that “the condition is rare,” adding that most humans live in harmony with their personal face mites until they’re old and grey. In other words, within your own lifetime, you could have several hundred generations of these grease-slurping, naughty night-time nasties living in your face. So puff up your pores with pride with the knowledge that even if no one else loves you, your feisty face mites couldn’t live without you.

One last silver lining
Your Demodex houseguests are quite thoughtful. According to the above-mentioned video, you will never have to clean up after your face mites because they do not have an anus. They store their feces inside their bodies until death. How’s that for good manners?