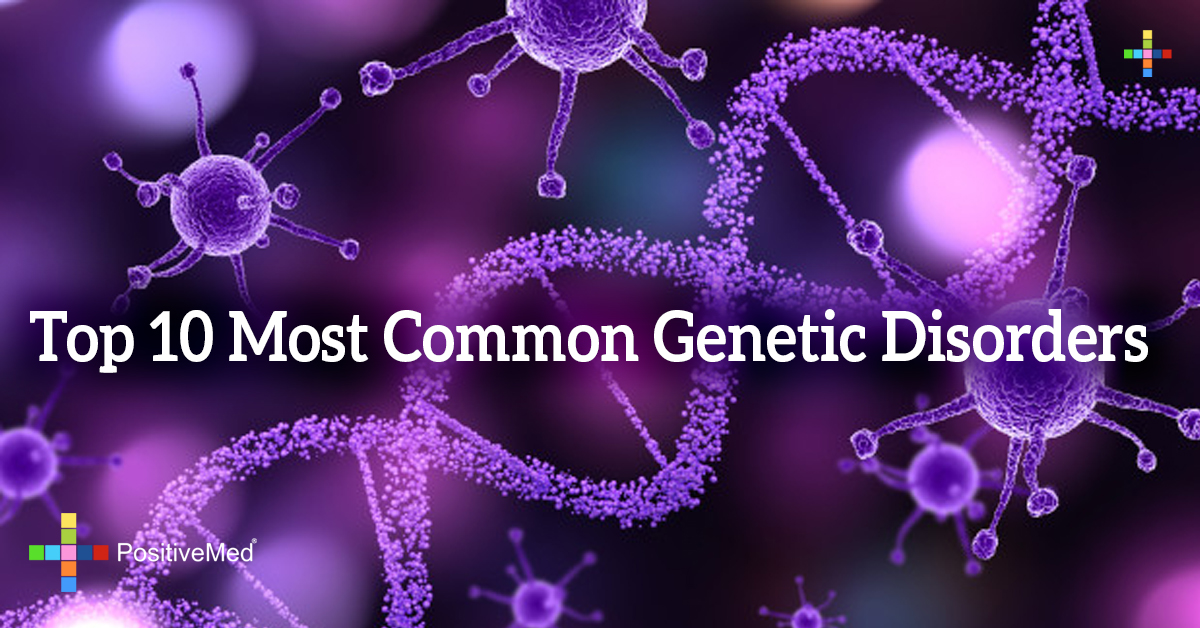 A genetic disorder is caused by abnormalities in an individual’s genetic material (the DNA, or the genome). There are four different types of genetic disorders. They are as follows: a single-gene is mutated; multiple genes are mutated; mitochondrial, the maternal genetic material in mitochondria is mutated; chromosomal changes-entire areas of the chromosome can be missing or misplaced.

A genetic disease is a terrible thing – an illness that is written into one’s very biological code so that it can be very difficult to avoid or, sometimes, even impossible. For parents, this can mean giving birth to someone who will never be ‘well’ in the traditional sense, and no amount of exercise or healthy living can change that.

The fortunate news is that genetic disorders are relatively uncommon, but that said, they are still a real danger and some are certainly more common than others. Here we will look at some of the most common genetic diseases, in no particular order.

Cystic Fibrosis is one of the most widespread inherited genetic disorders. It most often affects Caucasians who are Ashkenazi Jews. It occurs only when both parents are carriers, which gives their children a 1 in 4 chance of contracting the disease. Cystic Fibrosis results when lack of a certain protein is present and the balance of chloride in the body isn’t restricted. Symptoms include difficulty breathing, recurrent lung infections, digestive, and reproductive issues.

As its name suggests, this disorder affects immune system functioning. An SCID baby’s life expectancy is short, and whatever time they have left is spent, for the most part, in a “bubble” completely cut off from the world. This disorder is caused by the mutation of more than one gene and renders a person unable to fight off any kind of germs. It is believed to be caused by the absence of, or a lack of Adenosine Deaminase (ADA), as well as notable defects in T and B cell responses.

Tay-Sachs causes death at any early age, usually around five years old, because of a missing enzyme called Hex-A. Tay-Sachs causes progressive destruction of the nervous system and brain. There is no treatment for the disorder. There is only management of the symptoms.

This syndrome is caused by a premature fusion of the skull bones, which leads to a deformity of the head and face. Jackson-Weiss Syndrome or JWS also causes mental retardation and crossed eyes. This disorder is a very rare one and therefore its occurrence has not been regularly noted. The syndrome, which is caused by a mutation in the FGFR2 gene, presents itself by such symptomatology as an irregularly shaped skull, abnormal placement of the eyes, a bulging forehead, and foot abnormalities. Anyone with the disorder usually lives a normal lifespan.

Also known as Lobster Claw Hand, Ectrodactyly is marked by one or more missing digits on either the foot or hand. Individuals with the condition usually have a cleft where their middle digits should be. People with the condition can suffer from hearing loss as well. Ectrodactyly can be treated, to a certain extent, with corrective surgery.

This is an inherited disease which causes certain nerve cells in the brain and central nervous system to degenerate. Loss of these nerve cells causes symptoms such as behavioral changes, unusual snake-like movements (chorea), uncontrolled movement, difficulty walking, loss of memory, speech and cognitive functions and difficulty in swallowing. Treatment aims to limit the course of the disease. There is an adult-onset Huntington’s Disease (HD), which is most common and usually develops when a person is in the 30’s and 40’s. There is also an early-onset form which begins in childhood. HD is an autosomal dominant disorder, meaning that if one parent has HD, you have a 50% chance of having the disease—and if you inherited the gene, you will develop the disease and can pass it on to your own children.

Neurofibromatosis (NF), a nervous system disorder, causes tumors to form on nerves. Neurofibromatosis, Inc. reports NF as one of the most common genetic disorders in America, affecting one of every 3,000 to 4,000 births. About one-half of neurofibromatosis cases are inherited and the other half result from spontaneous genetic mutation. A common finding of this disorder is multiple cafe-au-lait spots (brown spots) on the skin all over the body.

Having the single expression of the gene for sickle cell does not cause the disease. The gene evolved to protect people from malaria. However, getting the gene from both parents, a double dose causes the red blood cells to “sickle” spontaneously during a stress crisis. The sickled cells get stuck in small capillaries and destroy joints and organs. Eventually, the victim will die of organ failure.

The thalassemias (beta-thalassemia is the most common, alpha-thalassemia is less common) is a group of inherited blood disorders where hemoglobin, the oxygen-carrying molecule, is not properly synthesized by the red blood cells. This results in an anemia—where the usual symptoms are fatigue, an enlarged spleen, easily broken bones, bone pain and shortness of breath. People with thalassemia may also have poor appetite, darkened urine and jaundice (a yellowish discoloration of the skin or the white parts of the eyes—jaundice is a signal for liver dysfunction). Infections are common in people with thalassemia.