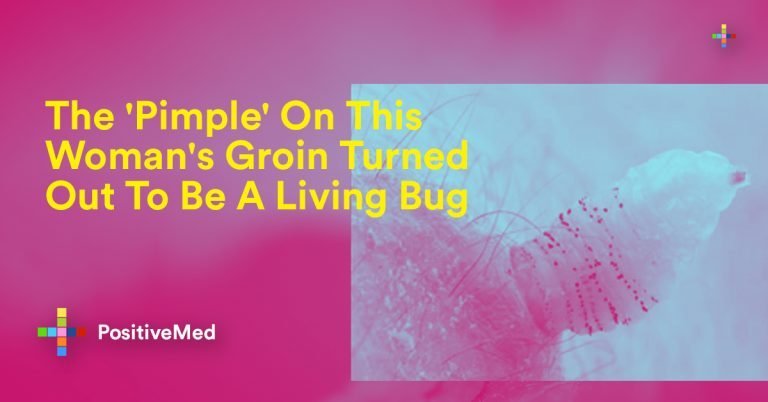 Going on a honeymoon is supposed to be a relaxing time, bringing souvenirs, as well as memories but a 36-year-old woman brought back much more than that.

An unidentified woman came home from her honeymoon and began to notice a small bite-like lesion on her groin. She didn’t pay much attention to it until the small, itchy pimple continued to grow in annoyance. Thinking that it may be a bug bite or spider bite, she went to her doctor who only prescribed antibiotics and sent her home.

The antibiotics failed to get rid of the bump, she went for a second opinion. At this point, the small bump had grown, festered and had developed a small hole in the center. The second medical opinion agreed that it’s a bug bite but how does the bump felt; it felt very hard to the touch. The doctor referred her to a surgeon to lance the bump and see what was growing and causing the issue.

When the procedure was performed, the surgeon lanced the wound and found live botfly larvae growing inside her skin.

Human botfly larvae are rarely seen as adults. Fully developed, they resemble a small, densely haired bumblebee. In form, they need warm, moist environments in which to grow. They are generally transmitted to the human host through a bite – from a mosquito or biting fly. This type of bite is the fourth most common travel-related skin issue, especially in tropical environments.

Once the egg is planted in the human host, the microscopic egg will thrive because of the heat of the human body. The egg hatches into a small larva which will grow and thrive for anywhere from 27-128 days. The small bite will continue to grow and fester leaving its host with an itchy, oozing pustule. The hole is formed to allow the botfly to breathe.

These bites usually occur in warm, moist places on the body such as the genitals, scalp, breast area, and even in the eye area. Many patients describe experiencing the feeling of the larva actually moving whenever the wound is covered or touched in any way.

Doctors report that such a bite is uncomfortable and, if left untreated, can become infected. The botfly larva itself doesn’t actually transmit any sort of disease. If left untreated, the larva will eventually grow large enough and make its way out on its own.

Treatment doesn’t usually require any sort of surgery. Many patients remove the botfly themselves. In areas where this is common, the treatment requires simply suffocating the larva by covering the wound with topical treatments such as petroleum jelly or nail polish (and even uncooked bacon strips!). In only a few hours, the larva, unable to breathe, will come to the surface head first. At that time, it can be extracted with a pair of tweezers or simply with pressure on both sides of the wound.

Not exactly the souvenir of choice, but it’s good to know that if it does happen to join you upon your return home, it isn’t dangerous and can be easily removed.