The Difference Between Lactose Intolerance and Crohn’s Disease 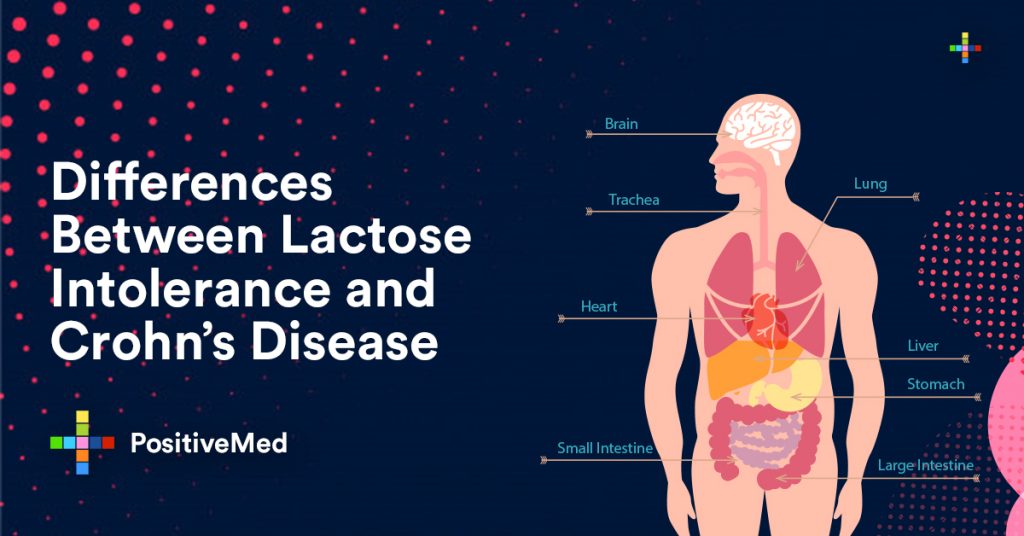 You have diarrhea that does not go away. On top of constantly making bathroom visits being a nuisance, you worry that a serious illness is behind it. There are many causes of diarrhea, and some share symptoms—making it difficult to determine what is behind your discomfort. Like a number of these conditions, Crohn’s disease and lactose intolerance have some things in common.

This disorder is chronic, meaning there is no cure. The intestine becomes inflamed leading to its unpleasant symptoms. There are times when patients feel fine and occasions when they have an attack (known as a flare). Many mistake these symptoms for the signs of lactose intolerance:

Because of the chance of confusion and the seriousness of the condition, it is important to see a doctor if symptoms don’t go away. The doctor will ask about your symptoms and conduct an examination. Blood and other tests may be necessary to help the doctor diagnose the cause.

This disorder occurs when a person produces too little or no lactase. Lactase is an enzyme that digests lactose which is sugar in milk products. Diarrhea, gas, nausea, and bloating are some of the signs of a deficiency. Because these symptoms also occur with Crohn’s, it is easy to think the wrong disease is the culprit. In addition, Crohn’s patients have a greater chance of being lactose intolerant than other people.

A visit to the doctor is vital if you have, or at least suspect to have, an intolerance to lactose. The doctor can discover if it is the result of medications or a condition that damages cells lining the intestines. These causes include celiac disease (intolerance to gluten), iron deficiency, and alcoholism. (However, if you avoid dairy products and diarrhea disappears, that may be enough to reach a diagnosis.)

Medications are beneficial in controlling symptoms and treat the underlying causes of intestinal diseases. However, there are additional ways to keep your symptoms under control. These drug-free remedies can keep diarrhea and discomfort at bay.

Avoiding certain foods is important. These include popcorn, cured and red meat, alcohol, carbonated drinks, high-fiber, and high-fat food, and nuts. On the other hand, salmon, avocado, tropical fruits including bananas, almond milk, and smooth peanut and almond butter are colon-friendly.

When symptoms flare up, a liquid-only diet can allow your colon to rest. You may want to avoid solid food for a few days to several weeks. Be sure to work with your doctor if you would like to try this remedy.

Turmeric contains curcumin, which may help reduce inflammation. While there is little proof of this, several studies showed some benefit. Turmeric is safe, even though taking too much or for too long can have a bad effect on the digestion.

Yoga, by focusing on breathing and posture, helps people relax. This is important because stress is a cause of flare-ups. (Actually, any exercise can help you relax and restore proper intestinal function.) According to research, yoga is effective and safe if you are not actually having a flare.

A diet low in fiber (often called a low-residue diet) is particularly helpful to lower the chance of a blocked intestine. It works by reducing the number and size of your bowel movements.

• Try eating dairy with others foods, not alone.
• Drink small amounts of milk (less than a cup) at one time.
• Try milk that contains less lactose.

Because limiting or eliminating dairy reduces the amount of vitamin D and calcium you take in, it is important to get it from other sources. Spending 15 minutes a day in the sun gives you all the vitamin D you need. In addition, liver and egg yolks are high in the nutrient, as are fortified foods like many breakfasts, cereals, and orange juice. Nondairy foods containing calcium include almonds, dark leafy greens, sardines, beans, seeds, and lentils.

Knowing these facts can empower you to take control of your digestive health. Living a normal and fulfilling life is possible with some changes to your routine and eating habits.

PrevPreviousWhat’s a Heart-Shaped Uterus—and Do You Have One?
NextWhat You Need to Know about Crohn’s Mouth UlcersNext