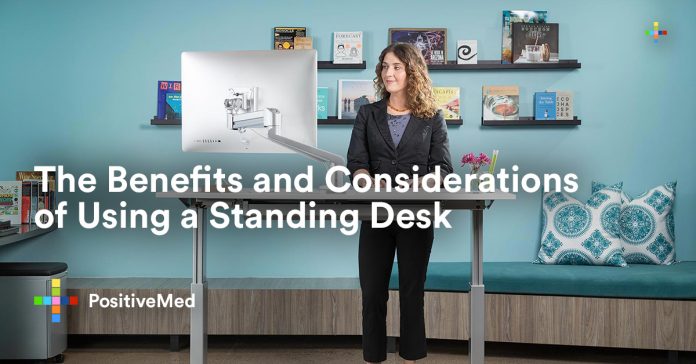 The soaring numbers of back problems that people around the world are suffering from just go to show that we have not yet biologically adapted to a sit-down lifestyle. We know that the way our spines work is better suited to movement, or at least to having to support itself during the day. Sitting down for the majority of the day is something which does not just lead to back problems, but (because sitting comes with a more sedentary lifestyle as a whole) can also come with the increased chance of heart disease, diabetes, and other health problems which are associated with a lack of exercise.

Since most office workers now spend their days sitting in front of a computer, these risks are serious, especially considering that sitting all the time can be a cause of weight gain, which also increases the risks of everything above. Fortunately for everyone who works behind a desk all day, standing desks are rapidly becoming more popular, so that they can move around again.

What are Standing Desks?

A standing desk, or stand-up desk, is essentially what it says on the tin – it is a desk which allows people to stand up while using them. While the first versions of these desks were static and fixed (so that people could only ever stand at them), modern versions have 12v actuators built into them to make them adjustable.

These desks can be used as normal desks or as standing desks, depending on how people want to use them at any given time. The use of standing desks is something which is still quite young, so there is not a lot of research into the effects that it might have on someone, but the early research does suggest that using a standing desk is good for those who are using them.

Standing Desks are Good for Weight Loss and Back Pain

Simply put, sitting all the time allows our backs to become lazy; since they are not being used to support the weight of a human, the muscle grows lazy. As a result, when we do need our backs to support our weight, they cannot do it, and from there we develop back pain.

Using a standing desk, even if it is one which uses linear motion to switch between being a sitting and a standing desk, can help to strengthen the back muscles, making it less likely that the person using the desk will develop back pain.

A desk which uses linear actuators to transform into a standing desk is also one which will help users, if not to lose weight, then at the least to control the gain through being somewhat more active than if they were just sitting down. Standing up in one place is only marginally more active than sitting down, but it still engages more muscles and burns more calories.

People who use standing desks have been shown to have less stress than their colleagues who spend their time sitting down. Whether this is purely psychological or is a direct result of using 12v actuator standing desks has yet to be fully determined by research. The fact remains that people who use the standing desks report that they have less stress. This possibly has links with mental health, as the movement has been shown to help people who are having mental health problems overall.