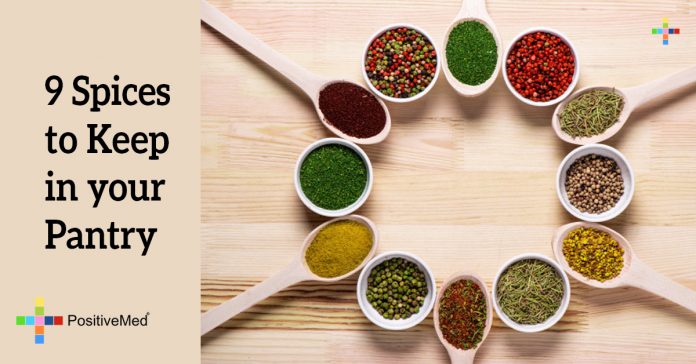 Spices and herbs are botanically classified as fruits and vegetables. And since they no longer contain the water that makes up a significant part of the fresh produce, spices and herbs offer an even higher level of antioxidants. In addition, spices and herbs also are rich in phytonutrients, such as carotenoids, flavonoids and other phenolics, all of which possess health-promoting properties
Common herbs and spices not only give amazing flavors to your food without the fat, salt, or sugar, but also may help protect against certain chronic conditions, such as cancer, diabetes, and heart disease, so, practically adding a favorite ingredient increases the health benefits of the foods we’re already enjoying.

Dill for good digestion: Its antibacterial oils not only kill any possible stomach bugs but also help in the breakdown of carbohydrates and proteins. A teaspoon a day can reduce 80 percent of bloating in only three days.

Oregano to fight bacteria: Oregano is just as effective at killing E.Coli and staph bacteria as penicillin, due to its high levels of antibacterial compounds and antioxidants

Bay Leaf as natural pain reliever: Bay leaf is rich in eugenol, a natural anesthetic that alleviates pain, therefore it is great to eliminate headaches and migraines.

Rosemary to fight fatigue and boost the brain: The phytochemicals found in rosemary can rev up your mind by increasing production of beta waves. Rosemary has a unique nutrient called carnosol that fights fatigue by flushing out energy-sapping toxins from the body.

Cayenne as appetite suppressant and metabolism booster: Cayenne increases your blood flow and metabolism thanks to a compound called capsaicin, which has thermogenic properties.

Cardamom to treat indigestion: The aroma and therapeutic properties of cardamom are due to the volatile oil in its seed, which contains cineol, terpinene, limonene, sabinene, and terpineol. Chew one teaspoon of these seeds to soothe a sour belly.

Sage as a memory minder: Both the phytonutrients and volatile oils in sage maintain levels of acetylcholine, a neurotransmitter that supports memory.