PositiveMed The Positive Side of Medicine
Home health Alternative Medicine Warning: Do Not Mix These Supplements 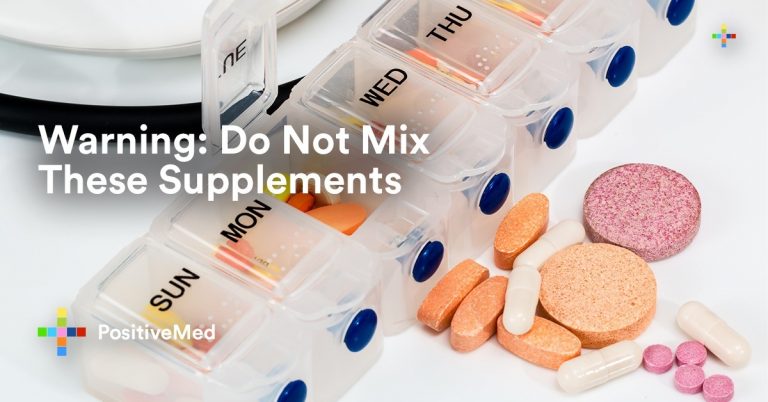 Nowadays, people are under prescription medications and mix supplements more than ever before. In addition, they are using more supplements—all from mineral and vitamin pills to flax seed oils and fish. Most of them are supplements and combining them with drugs can be riskier than many users know.

You may also be risking serious internal bleeding by taking together certain blood-thinning drugs with supplements. Some are unsuspectingly lowering the effectiveness of medications they take to battle cancer, prevent pregnancy, or control certain infections.

According to David S. , things that are natural are not always safe. He further explains that the reasons behind using different supplements originate from focusing on big populations that use the substances in their diet and they appear to have better health outcomes. Nevertheless, when these substances are put in the form of supplements, they become more concentrated. He further adds that consumers should expect a potential for toxicity and interactions when using supplements with other drugs.

You need to be cautious of these combos when using supplements with various medications and other herbal supplements.

Drug interaction: Using fish oil combined with drugs for lowering the blood pressure can aggravate the effects of the drugs and may extremely lower the blood pressure. In addition, be cautious when taking fish oil with other medications that raise the risk of bleeding. Examples of such drugs are ibuprofen, aspirin, and naproxen.

Supplement interactions: When you consume high amount of fish oil doses combined with herbs that reduces the clotting of blood such as Ginkgo biloba, it may result in bleeding.

Drug interactions: Using melatonin can make you drowsy. When you take with sedative drugs such as narcotics, benzodiazepines, and other antidepressants, it can make you to have extreme sleepiness. Melatonin can as well slow the clotting of the blood, and taking it with anticoagulant drugs such as warfarin or heparin. It can increase the risk of bleeding and bruising. When taking drugs to control the blood pressure, avoid melatonin as it can raise your blood pressure.

Supplement interactions: When you use melatonin with other supplements that contain sedative properties such as valerian and St. John’s wort, it can aggravate the effects and the side effects caused by melatonin.

Supplement benefits: It has innumerable benefits in the body such as building and maintaining strong bones. Your muscles, nerves, and heart require calcium to function properly. Some other studies show that when calcium is used along with vitamin D, it can have more benefits such as protecting against high blood pressure and diabetes.

Supplement interactions: It can interfere with the functioning of various medications such as bisphosphonates, including alendronate, antibiotics in the tetracycline. It can also interact with some blood pressure drugs, and quinolone families such as levothyrocine which treats hypothyroidism.

Drug interactions: When you take St. John’s wort with some antidepressants, it may result to very high levels of serotonin in your body. This can lead to serious side effects such as seizures and muscle rigidity. The St. John’s wort may also cause other medications to be less effective such as HIV drugs, birth control pills, and blood thinners. In rare cases, it can interact with some migraine drugs such as zolmitriptan and sumatriptan. This can increase the chances of serotonin syndrome.

Drug interactions: Vitamin D can reduce the effectiveness of the drugs that lowers the cholesterol levels such as atorvastatin. It can also interfere with some medications for high blood pressure. When you consume high doses of vitamin D along with a diuretic medication, may lead to a high amount of calcium in the body, and this can lead to kidney failure.

Drug interactions: When you use an antibiotic that has tetracycline or quinolone, the zinc supplements make it more difficult for the body to absorb the drugs. To confirm that you have taken the correct amount of the antibiotic, take it two hours before or six hours after you have taken zinc supplements. The same holds for penicillamine medicine, which are frequently used to treat rheumatoid arthritis. Ensure you take the zinc supplements two hours before you take these medications to stop poor absorption of penicillamine.

Drug interaction: Garlic has innumerable benefits in your body such as reducing cholesterol and blood pressure. However, it can increase the chances of bleeding when taken with anti-clotting drugs, such as blood thinners. It also makes the anti-HIV medication saquinavir to be less effective. Plus, it can reduce the levels of the blood sugars, hence affecting the insulin needs of the body.

Drug interactions: Studies show that ginger can help to relieve vomiting and nausea. It also eases digestion and stimulates appetite. Nevertheless, it increases the chances of bleeding when taken with anti-clotting drugs. When taken with cyclosporine antibiotics, it can lower the blood levels.

It is advisable for consumers to discuss the supplements they use with their doctors. However, studies show that 25% of users of herbal drugs and other supplements don’t do that. The health care providers should have a concern to ask their patients