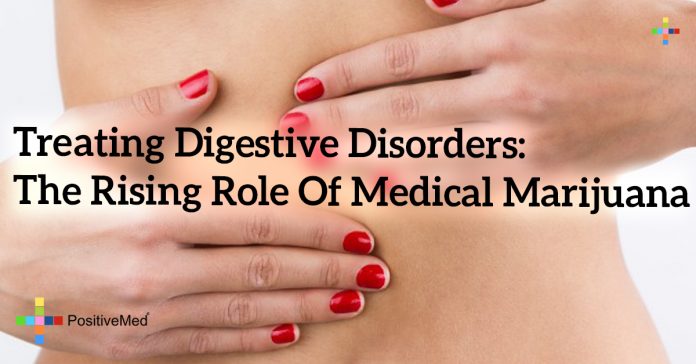 Whether cannabis is welcomed, viewed with suspicion or banned outright depending on the jurisdiction that you live in, the body has a mechanism in place to produce its own natural cannabinoid chemicals. The endocannabinoid system, as it is termed, is responsible for various emotion-related responses, as well as functions related to stress response, memory and digestive function.

The THC and CBD cannabinoids present in marijuana are closely enough related to the body’s own cannabinoids and chemical structure to activate the endocannabinoid system. The effect can be of use in the treatment of certain digestive disorders.

Evidence available for the medical uses of marijuana is limited at this time because of the laws in place that restrict the availability of the substance. It can be hard for researchers to obtain samples for study. A small body of research is beginning to emerge, however. The evidence on hand does suggest that marijuana has a role to play in the treatment of medical conditions.

In another animal study, it was found that CBD was effective as a way to prevent the occurrence of colitis. CBD is most effective as a preventative against pathogenic colitis. Exposure to CBD as a way to modulate the functioning of intestinal enteric glial cells has been found to be effective. These cells are tasked with the function of defending the intestinal tract against pathogens, a function they perform through the production of inflammation-inducing proteins. Exposure to CBD is able to lower the intensity of the defense response, an action that maintains protein production at sufficient levels to enable protection of the intestinal tract while preventing inflammation.

Crohn’s disease is a different variant of the inflammatory bowel disease. In a study conducted in Israel on 30 subjects suffering from Crohn’s disease, there was complete agreement that improvements were seen. The impact of medical marijuana and herbal vaporizers usage was seen as positive. Nine of the patients reported a slight improvement in the condition, and the other 21 reported significant improvement. All of them reported needing to use fewer of their medications when using marijuana. In some cases, patients reported going off their prescriptions altogether.

The study was more anecdotal than rigorous. Results depended on a personal recollection by patients. There were no independent tests done on the results. Another study performed in Israel, however, was far more rigorous. The placebo-controlled study offered results that were far more reliable. Subjects who used marijuana reported improvements at ten times the rate of those who used the placebo.

Irritable bowel syndrome is a gastrointestinal disorder marked by symptoms such as diarrhea, pain and rectal bleeding. Researchers have long suspected a connection between IBS and certain mental disorders such as anxiety and depression. There is some evidence to suggest that both IBS and these psychiatric disorders are caused by disruptions to the body’s microbiome — the ecosystem of microorganisms that live both in the digestive tract and elsewhere in the body.

Research done in the year 2008 suggests that both issues are traceable to an endocannabinoid deficiency in the body. Studies have shown that marijuana is able to directly address a number of symptoms associated with IBS. Hypermotility, a condition seen in IBS that has food moving too quickly through the gut, is effectively treated with marijuana. Use of marijuana suits inflammation of the intestinal lining, as well.

While marijuana is no cure for IBS, it offers excellent symptomatic relief.

Celiac disease is an autoimmune disorder that is set off as a response to the presence of gluten in the diet. To persons suffering from celiac disease, a diet that contains the gluten protein can cause damage to the villi in the intestinal lining, a condition that results in an inability to absorb nutrients.

A study in 2013 found that marijuana use offered encouraging results in the treatment of this disease. Marijuana was seen to be able to target the CB 1 and CB 2 receptors in the digestive tract, bringing relief to celiac patients.

It’s important to proceed with caution

As encouraging as the idea is that marijuana can help with chronic, painful conditions of the digestive tract, it’s important to remember that studies in this area are in their preliminary stage. Evidence exists pointing to the ability of marijuana to induce psychoses, anxiety, and paranoia. Addiction and a drop in IQ are possible, as well. Proceeding in consultation with a qualified doctor can help.

John Bailey is the Content Manager for Davinci Vaporizer. John brings a wealth of knowledge in many facets of marketing and branding experience to the industry. John loves health and fitness, Doctor Who, dark scotch, hiking, and photography. Contact him at (512) 954-4630 or email [email protected]