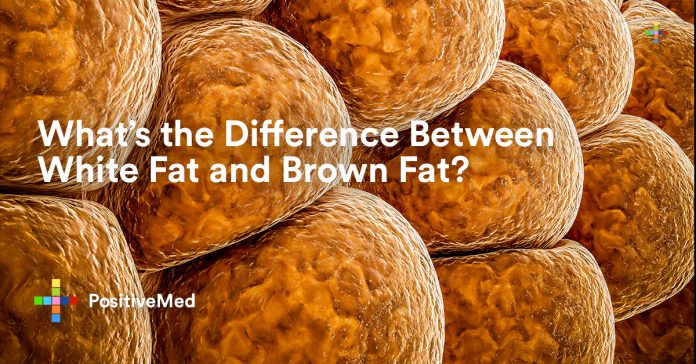 Most people who struggle with weight loss constantly look for information relating to fats. The purpose of this article is to find a fact about white fat and brown fat as a physical entity. It doesn’t mention why some people are slim, overweight, or obese. Let’s have a look at some facts you probably don’t know about.

This type of fat is made of small droplets of lipid (fat) and many mitochondria that contain iron. The brownish appearance of brown fat comes from the iron and lots of blood tiny vessels. Brown fat is commonly found in the front of the back of upper back and the neck.

Brown fat is intended to burn calories to produce heat. It is the reason why brown fat is commonly known as the “good” fat. Other than storing calories, the brown fat helps to burn. Brown fat comes from muscle tissue and found mostly in newborns and hibernating animals. As kids grow older, the amount of brown fat decreases considerably. Adults with comparatively more brown fat are usually younger and slim. They also have normal blood sugar levels.

Brown fat is generated when you exercise. Your body converts white-yellow fat to brown fat which is more metabolically active. Getting adequate high-quality sleep every night also generates brown fat. This is because an increase in melatonin production promotes the production of brown fat. Exposing your body to the cold, like when working out in cold weather, sponsors the production of brown fat.   Consider lowering the temperature in your working spaces or living room. Your body deserves as much of this type of fat as possible.

Related link: The 9 Fats You Need to Lose Weight

This type of fat consists of a single lipid layer and has fewer mitochondria and blood vessels. That’s why it is white or yellowish in appearance. White fat is the most dominant type of fat in the body. It usually originates from the connective tissues.

White fat plays many roles. It acts as the largest energy reserve in your body. It also serves as a thermal insulator and cushions internal organs when exercising. White fat is also a major endocrine organ that produces one form of estrogen and leptin, a hormone that controls appetite and hunger. Additionally, it acts as the receptor for growth hormone, insulin, and cortisol (stress hormone). Most people think that white fat sits all day and night without doing anything.

In young women, white fat is commonly found in the buttocks, hips, thighs, and breast. After menopause, the fat may get redistributed in the abdomen. On the other hand, men accumulate white fat mostly in the belly region.

Visceral fat (accumulation of white fat in the belly) is connected to metabolic syndrome. This refers to a number of symptoms that puts you at an increased risk of heart disease, cancer, and diabetes. Where your white fat occupies matters a lot! If white fat is found throughout your body, chances of developing cancer. These include breast, esophageal, colon, gallbladder, and pancreatic cancer. Sleep apnea and physical disabilities like knee arthritis are also associated with accumulation of white fat throughout the body.

Let’s have a look at how much a “normal-weight” person can handle for a lifetime. Men usually carry around 15% to 25%. Women carry about 15% to 30%.  A generic person weighing about 154 pounds would carry about 20 pounds of white fat.  One pond of stored fat in the body contains approximately 4,000 calories. That means if you have 20 pounds, you have 80,000 calories of energy storage. Your body usually requires about 2,000 calories per day for your survival. 20 pounds of stored fat in the body can help you to survive for 40 days without taking calories. Although these figures are not accurate, they are meant to give a general idea.

Generally, your body generates white fat when you consume many calories and spending fewer calories.

White fat plays important role in our survival. What counts most is the amount and where it is located in your body. If you want to control your visceral fat level, you are supposed to maintain your waist circumference to less than 35 inches if you are a woman. On the other hand, men should keep it less than 40 inches. It is also important to maintain your total body fat within the normal ranges.

You are probably wondering if there is an interaction between white fat and brown fat. A recent research found out that people who overeat increase their total amount of white fat. However, overeating results in their brown fat becoming less efficient which also affect their ability to burn calories.

You are now aware of some facts about fat. Starting from today, you should try to achieve the following goals. First, optimize your brown fat function and control the production of white fat. This is very simple. Stay active, eat whole foods in moderation, overcome stress, and live a responsible lifestyle. It is the only way to keep those mitochondria active while your health improves.