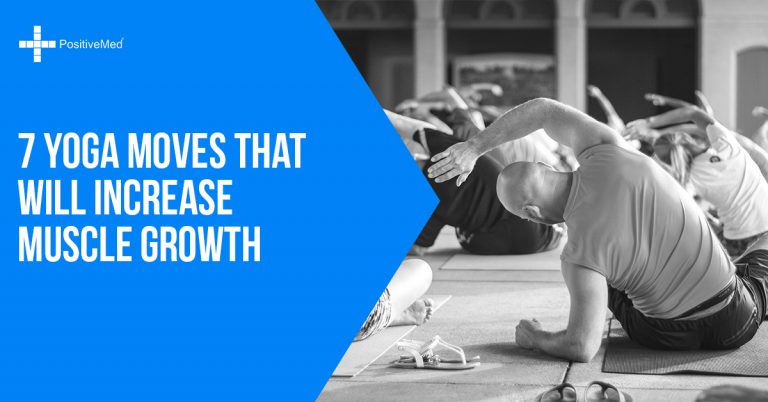 Yoga is often associated primarily with core stability, balance, flexibility, and relaxation as opposed to a method to increase muscle mass and strength. However, as this type of exercise is a form of calisthenics, it can be surprisingly effective in promoting muscle growth or maintaining lean muscle during weight loss.

This muscle development comes from moving certain body parts while they are under load and, as such, some movements, or poses, will provide more benefit for muscle growth than others, either due to a greater range of movement or a larger strain placed on the working muscles.

Below, the seven best yoga poses and transitions for muscle growth are shown, along with the muscles they target, and ways to make them easier or more challenging.

The Utkatasana is a great pose for exercising the lower body muscles. The use of a semi-squat position means it’s useful in developing the legs and butt while also being an easy pose to do for beginners right up to experienced yogis.

Progressions for this pose include the Mālāsana, which increases the depth of the movement. Increasing the length of time you hold this pose is also a useful way to increase the difficulty.

The pose can also be made easier by either lowering the time spent holding the pose or by decreasing the depth of the position.

This pose is a great way to develop the glutes and low back while also working the abs. However, this move is better suited for intermediate to advanced yogis, with the difficulty of the pose possibly being too high for most beginners.

The move can easily be adapted, though, by starting with leg lifts or using a wall for support and gradually increasing the range of the pose. It can also be made harder by slowing the speed at which the move is carried out or by using small ankle weights to add resistance.

Unlike the two poses mentioned, this movement will primarily develop the upper body musculature. Muscles like the chest and shoulders are heavily involved in this exercise, and it is also an excellent way to improve balance.

The Bakasana is best suited to intermediates, but it can be progressed into a full handstand for advanced yogis and made easier for beginners by using a wall to support the pose when first attempted.

The Ustrasana is both a useful pose for stretching the abdomen and the hip flexors and for developing the back. The tight squeeze at the end of the pose is great for developing the muscles in the upper back while the high level of extension helps exercise the low back.

This pose should suit beginners and intermediate yogis well, while advanced practitioners would benefit from a longer hold in the pose or by increasing the number of times the movement is carried out.

The Navasana pose is a great addition to any yoga workout to help develop and tone the abs, with the exercise daily progressed by increasing the time held in the position and made easier by starting with movements like jackknife crunches for beginners.

For very advanced yogis, it can be progressed further by using ankle and wrist weights for a challenging workout.

This pose, like the Utkatasana, is an excellent means of developing the muscles in the legs. However, unlike the Utkatasana, this pose is carried out in a spot stance, allowing the torso to remain more upright, making it an ideal exercise for those with weak backs or beginners.

More advanced practitioners can progress to the above poses or use small weights to make the Virabhadrasana more difficult.

Commonly known as the ‘downward facing dog,’ this is another pose that can be useful for exercising the upper body and can be used for beginners looking to progress to a Bakasana or handstand pose.

It can also be made more difficult for experienced exercisers by adding resistance bands to the arms and legs to increase intensity.

By including the above poses into a yoga session, you can get in a comprehensive workout that develops every muscle in the body. Also, by continuously progressing each exercise, you can make consistent progress with each session.

However, to maximize muscle development, the use of free weight exercises should be included either alongside yoga poses or in another workout during the week.

Also, increasing muscle mass requires a greater amount of protein and nutrient intake. Supplementing with high-quality products such as those from Olympus Labs can help improve the results from your workout and optimize muscle development.