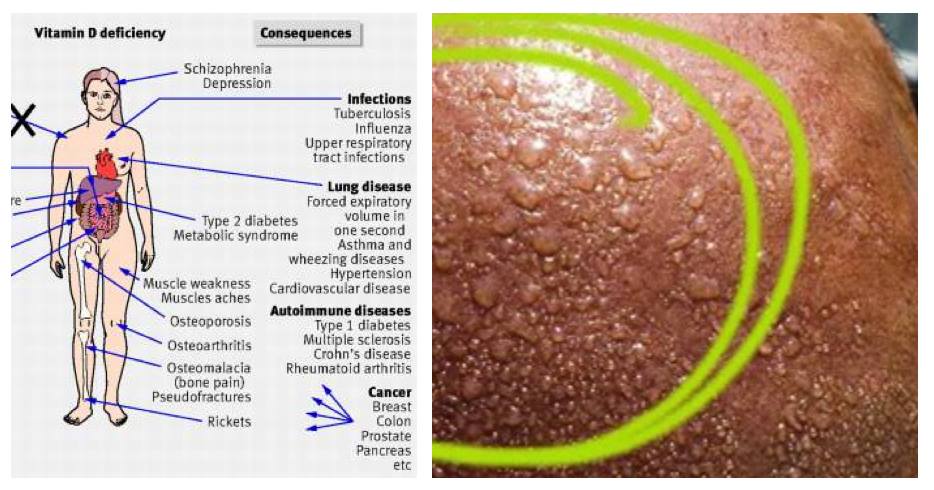 In the US, it’s extremely common for people to have vitamin D deficiency. Sadly, very few Americans acknowledge the risks. Consuming fortified foods that contain vitamin D (such as milk) is not enough; in fact, there are very few food varieties with sufficient quantities to support people’s health needs. In spite of its common name, we’re not talking about an ordinary vitamin. Vitamin D is a steroid hormone best obtained naturally from exposure to the sun, and not through dieting.

Vitamin D is vital if you want to have strong, healthy bones. But when you’re not exposing yourself to the sun enough, and you’re not eating vitamin-D enriched foods, certain illnesses may occur. Rickets for example, is a common disease associated with vitamin D deficiency. The bone tissue can’t materialize properly, thus leading to skeletal deformities and brittle bones. Here are some clear signs that you might be suffering from vitamin D deficiency.

According to specialists, African American people have higher chances of suffering from vitamin D deficiency because of the dark color of their skin, which needs up to 10 times more exposure to the sun than people with lighter skin tone. An individual’s skin pigment behaves just like a natural sunscreen; the more pigment you possess, the longer you need to stay in the sun in order to get a suitable amount of vitamin D.

As we age, our skin can’t make the amount of vitamin D that the body needs to stay strong and healthy. Since adult people spend a lot of time indoors, their kidneys are not that efficient at transforming vitamin D into a form utilized by the body anymore. Vitamin D deficiency is pretty common when you’re not going outside; in this case, supplementation may be recommended by your physician.

Vitamin D is a hormone-like, fat-soluble vitamin. The body is more like a sponge that soaks it in instantly; however, when you’re obese or overweight, your body will need a lot more vitamin D than someone who’s thinner. Since that is unlikely to happen, severe deficiencies can appear and your bones will probably feel more sensitive than ever before.

Those who suffer from inflammatory bowel syndrome, Crohn’s or celiac disease, may have higher chances of developing vitamin D deficiency due to the way these gastrointestinal health conditions affect the absorption of fat. Because of these stomach issues, the whole process of fat absorption is lower, which automatically lowers the absorption of vitamin D, too.

Studies have shown that increasing your regular dose of vitamin D could prevent the development of severe chronic diseases such as cancer, heart conditions and others. Somebody who decides to elevate his vitamin D intake has lower chances of developing prostate and colorectal cancer, as well as a wealth of other types of deadly cancers by up to 50%. We’re talking about a severe illness that must be taken seriously. It’s important for people to realize that vitamin D is vital in helping preserve cell growth. Vitamin D is also known to fight infections such as flus and colds, considering it has the power to regulate people’s immune system, and thus destroy viruses and bacteria.

Those suffering from vitamin D deficiency should increase their daily intake through supplementation and dieting. Even though, there’s no consensus on the levels of vitamin D the body requires to stay healthy, 20 ng/mm should be enough. If your skin is extremely sensitive to the sun and you use sunscreen on a daily basis, vitamin D supplements are vital. Prior to starting a treatment, talk to your doctor in order to have the proper dosage.

It’s equally important for patients to know that taking vitamin D supplements also requires taking vitamin K2. This vitamin’s biological role is to help relocate the calcium into apposite areas of the body, like your teeth and bones. Vitamin K2 removes calcium from areas where it shouldn’t be, like your soft tissues and arteries. Overall, both vitamin D-enriched foods and the sun are viable sources to get the right amount of vitamin D that your body needs to stay healthy. The only way to know if you’re deficient is through a blood test, so before taking any supplements make an appointment to know for sure.

By Charles Goodwin and Supplemented.co.uk!