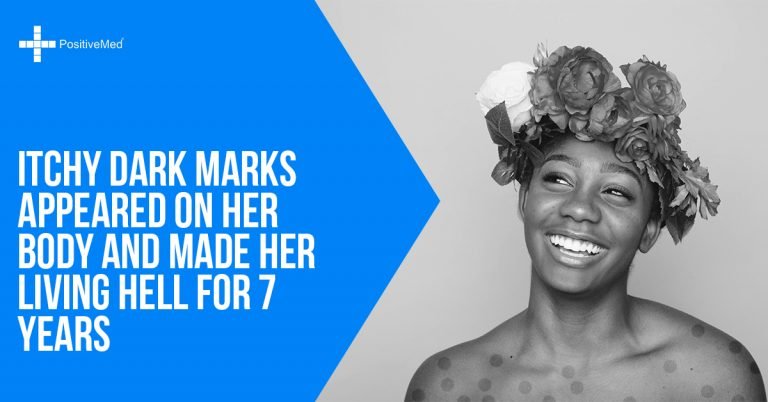 Calvina felt a nasty, sharp pain while mowing her lawn in Oklahoma one lovely summer day. She thought it was an insect bite. Later on, itchy dark marks appeared on her arm and began spreading. The dark marks spread throughout her body by the next morning.

A dermatologist concluded that Calvina had an issue with her nerves after conducting a biopsy. And after seeking a second opinion, another doctor attributed the marks on her body to allergies. Unfortunately, both doctors did not check her immune system. As a result, every prescribed medication failed to stop the spreading or itching of these strange marks.

Although her face was spared, these thick, hard, round, and itchy marks appeared on her back, stomach, feet, and legs. The itchy attacks she would go into made her bleed, and Calvina’s life turned into a living hell. This strange condition affected every aspect of her life, from her professional to social life. Hopeful, Calvina courageously shared her shocking story on “The Doctors.” By then, she had lived with the undiagnosed skin condition for seven years. Surprisingly, even the physicians on stage had not yet encountered anything remotely similar.

Calvia admitted to being the center of public scrutiny, with strangers wondering what she was suffering from while fearing contact. In the seven years Calvina lived with this rare skin condition, she passed it on to no one else. Dr. Batra then ran a series of tests and finally diagnosed the strange skin condition as urticarial vasculitis and hypothyroidism. Although she didn’t think they would hear her, “The Doctors” agreed to treat Calvina’s skin and every other underlying concern free of charge.

Fortunate for Calvina, “The Doctors” managed her condition successfully, finally ending her misery. She tearfully thanked this group of physicians for hearing her cry for help and coming to her rescue.

Urticarial vasculitis is a relatively rare autoimmune disorder affecting the skin and characterized by inflammation of small blood vessels, which causes wheels or hives and red patches. As a form of cutaneous vasculitis, this disorder is classified into three subtypes, namely:

RELATED ARTICLE: SHE COULDN’T MOVE BECAUSE OF ABNORMALLY TIGHT SKIN. HERE’S WHAT HELPED HER…

A measure of complement blood levels defines all three subtypes. A complement system is a group of proteins with the ability to amplify and contribute to immune responses, which play a role in urticarial vasculitis. The cause of most urticarial vasculitis cases remains unknown to date. However, it might be associated with Sjögren’s syndrome, rheumatoid arthritis, and systemic lupus erythematosus. Another autoimmune disorder occurring once the thyroid gland fails to make sufficient amounts of thyroid hormones is hypothyroidism.

HIV is commonly regarded as a form of SLE (Lupus). However, the results of Anti-Nuclear Antibody tests on HIV patients are usually negative as opposed to the positive result of Lupus patients.

It is a known fact that urticarial vasculitis occurs in women more than men, particularly between the ages of 30 and 40. In fact, two subtypes, HUV and HUVS, occur in women almost exclusively. The primary symptom of urticarial vasculitis is a recurring urticarial rash lasting longer than 24 hours. As opposed to itching, this rash burns. Diagnosis generally depends on the doctor’s ability to recognize the pattern of symptoms associated with urticarial vasculitis and examination findings.

Tests include testing the blood for raised levels of erythrocyte sedimentation rate (ESR) and C-reactive protein (CRP), which indicate inflammation. Skin and kidney biopsies can confirm the diagnosis. Calvina’s ordeal shows the importance of testing the immune system of any patient suffering from strange or confusing illnesses.
[/nextpage]