1- Coca-cola adds phosphoric acid to their drinks because the sweetness of coke would normally make the comsumer vomit. Each can of coke can contain up to 10 teaspoons worth of sugar.

2- Most fast food companies use a process called ‘mechanical separation’ which is a way to separate the bones and chewy pieces from the meat. This process however results in excess bacteria and so to cover up the bacteria the meat is artificially flavored and dyed.

3- Patties of meat such as crab cakes or hamburger patties can sometimes be made by the industrial food industry using what is called “transglutaminase” made from parts of pigs and cows blood, which is known commonly as ‘meat glue’. The worst part? Transglutaminase doesn’t have to be listed on the ingredients list which means you may not even know if it has been used. This meat glue is banned in the European countries but legal in the US, Japan, Sweden and many other countries.

4- The average fast food consumer eats around 12 hairs in a year. Unwanted hairs are occaisional in normal food at restaurants but the likelihood of ingesting a hair is much higher at a fast food restaurant.

6-Of all the food listed on the typical American McDonalds menu only seven of the items contain no sugar. This means there are hidden amounts of sugar in your drinks, dressings and even your french fries! 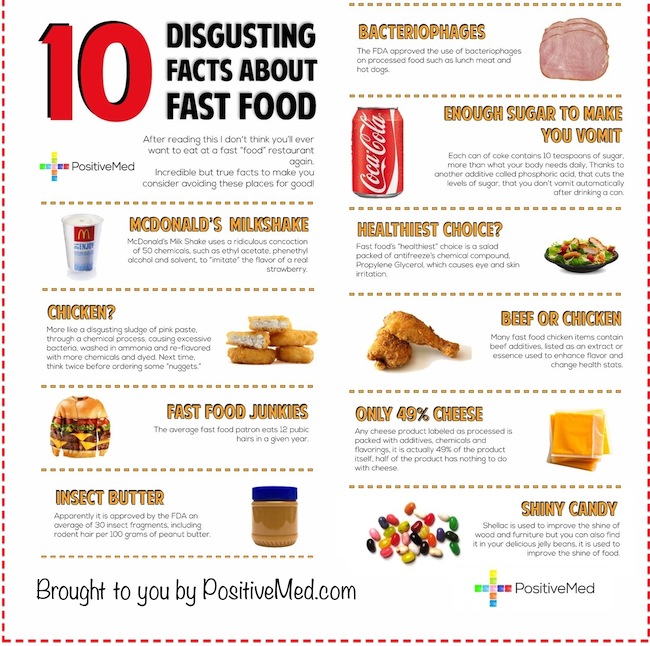