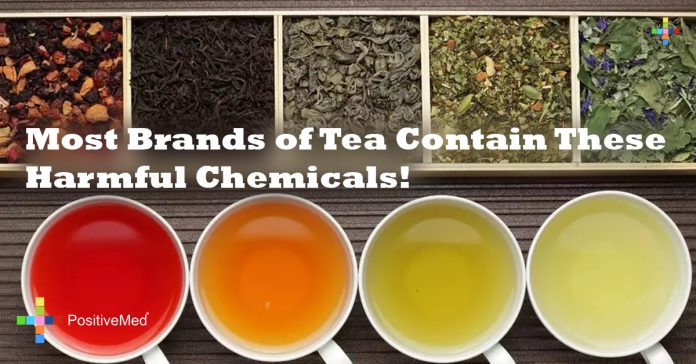 Compared to energy drinks, coffee, and pop, most people consider tea as a healthier source of caffeine. However, many of the conventional tea brands have been found to contain significantly high levels of harmful chemicals including dangerous pesticides and fluoride. As such, most are considered unsafe for human consumption.

Same as almost every other product, not every brand of tea is created equal. Choosing to save some money on cheaper teas might cost you a lot more in terms of your health.

Because tea is rarely washed before packaging, the dangerous pesticides previously sprayed on the crop often end up in your cup. This is especially true seeing as evidence confirms that many non-organic tea brands contain dangerous pesticides that are known carcinogens. Most of the popular tea brands list natural flavors as an ingredient, which has led to the misconception by consumers that they are purchasing better, cleaner ingredients. However, there is an entire list of what “natural flavors” might mean.

Research published in Food Research International shows a significant percentage of the United Kingdom’s population exceeds the recommended intake for fluoride. Too much intake of fluoride often bears detrimental health effects. The overexposure to fluoride has been determined to be specifically due to the consumption of tea. Apart from causing kidney problems, this overexposure can also lead to issues with the teeth and bones.

Where fluoride comes from
As tea plants grow, they accumulate the fluoride absorbed from the soil, which means older leaves contain comparatively higher amounts of fluoride. Tea brands of a relatively cheaper quality are often from old tea leaves, which usually contain more fluoride. Such teas also contain the most minimal amounts of anti-oxidants, significantly limiting the health benefits linked to drinking tea.

The Canadian Broadcasting Corporation (CBC) investigated a few of the most popular international beverage companies including:

Alarmingly, the CBC found that the level of toxins contained in at least half of the tea brands exceeded the legal limit. The worst offenders among the investigated brands include:

King Cole: This particular tea brand contains monocrotophos. Because this chemical causes irregular heartbeats and is also known to cause comas, it is presently in the process of being banned.

Uncle Lee’s Legends of China: This brand was found to contain at least 20 different types of pesticides. Endosulfan, known to damage the nervous system, was among the 20 pesticides.

You should, however, note that listing the two brands as the worst offenders are not to mean the other brands are totally safe. As a matter of fact, Red Rose tea was the only brand found to contain zero pesticides.

Avoiding the toxic chemicals found in tea
Ensuring you are safe from the harmful chemicals or pesticides found in teas does not necessary means quitting your tea-drinking habit. After all, tea is also a source of some incredible health benefits. You can, however, try the following as a solution.

• Switch to white tea seeing as it contains the least amount of fluoride compared to other teas because it is made from young leaves.

• Ensure you either brew your tea from scratch or you buy loose leaf tea.

• Check the list of ingredients, making sure no GMO ingredients or added flavors are included.

• Be extremely careful and particular when ordering tea while eating at a restaurant since most of these establishments use tea brands known to contain high levels of pesticides.

• Know exactly how long it should take to brew a particular brand of tea. For instance, the recommendation is that you steep black tea for 3-5 minutes, white or green tea for 2-3 minutes, and oolong tea for 4-7 minutes. You should let herbal teas steep for a minimum of five minutes. Remember, stronger tea takes more time.

Safe bagged tea
Listed below are some of the bagged teas considered safe for consumption.

For a breakdown of various tea brands and how each measures up in terms of health, watch the video below.

Conclusion
As much as drinking tea offers significant health benefits, it can also lead to several health concerns. As such, being careful and particular about the type and brand of tea you ingest is of great importance. As evidenced above, the cheaper the tea, the more harmful it is bound to be, which makes opting for a high-quality brand the better option.