For many years, purslane (Portulaca Oleracea) has been overlooked as little more than a common weed. However, purslane is actually classified as an annual succulent and widely eaten throughout Europe, Asia, Africa, and the Middle East. Sadly, it’s largely ignored in the United States. The plant has a slightly sour, salty taste, and all of the leaves, flowers, seeds, and stem are edible. 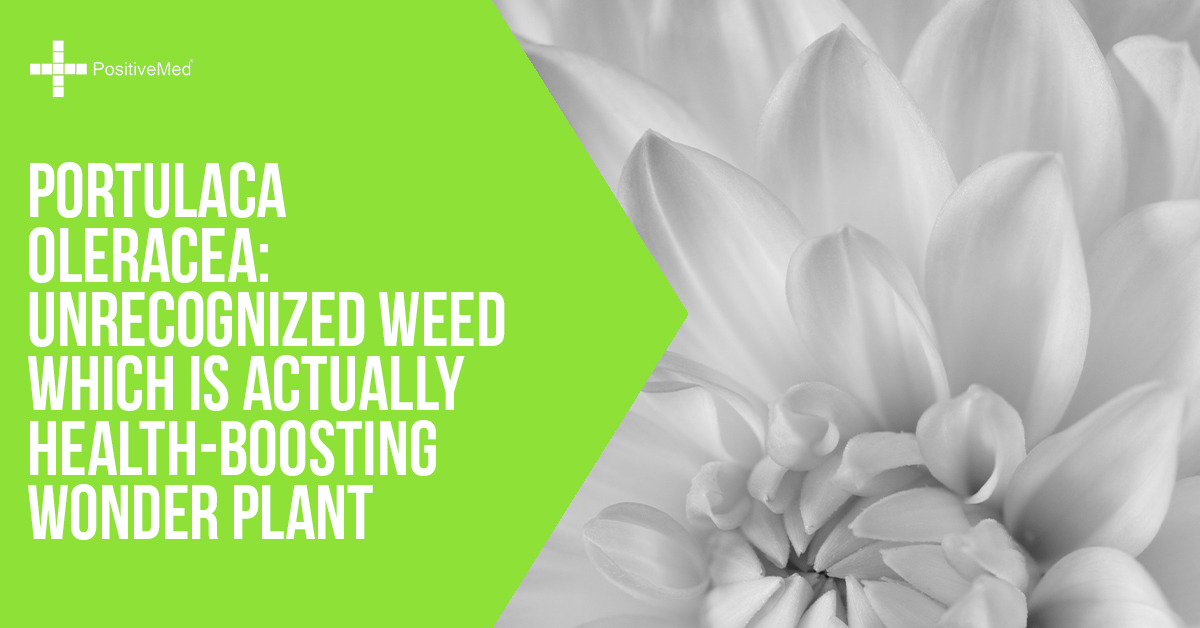 Purslane is believed to have originated in the Mediterranean region but has been used since prehistoric times the world over, namely in Chinese medicine, as well as Australian aboriginal cultures. Usually added as a culinary implement to dishes such as soups, salads, stews, and bread, the plant can also be taken as a supplement or tea.

Portulaca Oleracea has recently undergone a major comeback in the health & wellness world, and here are just a few of the many benefits this not-so-weedy plant carries after all!

1. Heart Health:
Potassium and Omega-3 fatty acids are well-known heart health boosters, both of which can be found in purslane. Potassium helps lower the blood pressure while Omega-3 fatty acids work to reduce the levels of bad cholesterol that can accumulate in the body.

According to a featured article in Organic Facts, researchers were shocked to do discover extremely high levels of omega-3 fatty acids in purslane, much higher in fact that in some fish oils. Consuming foods that are rich in Omega-3s can not only reduce cardiovascular disease but also atherosclerosis, preventing the risk of heart attack and stroke. Additionally, the potassium-rich purslane can help reduce blood pressure due to acting as a vasodilator, which means it relaxes the blood vessels, eliminating strain on the heart.

purslane contains powerful levels of anti-carcinogenic vitamin C and vitamin A, both of which work to reduce the risk of certain cancers, namely lung and oral cancers. Purslane additionally contains betalain pigment compounds, responsible for the plant’s faint yellow hue. Beta-cyanins and beta-xanthins have been scientifically proven to prevent free radicals from causing mutations in healthy cells, which can potentially lead to the development of cancer.

RELATED ARTICLE: This Amazing Plant Can Help you Cure Fibromyalgia, Insomnia, and More

Because purslane is a naturally low-calorie, fiber-loaded food, it’s perfect for those looking to shed crucial pounds while still feeling full throughout the day.

4. Gastrointestinal Health:
While many Westerners shy away from alternative treatments such as those found in Chinese medicine, purslane has long been used to treat maladies ranging from diarrhea to intestinal bleeding. Purslane’s organic compounds-dopamine, alanine, glucose, malic acid, and citric acid are likely responsible for easing gastrointestinal upsets.

5. Bone Strength:
Purslane is rich with calcium, magnesium, iron, and manganese, all vital protectors of bone health, which can help reduce the chances of developing osteoporosis later in life.

READ ALSO: 8 Warning Signs of Magnesium Deficiency You Can Fix It Naturally

6. Improved Circulation:
Because it’s full of iron and copper, purslane is a great contributor to a healthy circulatory system.

7. Vision Booster:
Vitamin A and beta-carotene are both necessary for maintaining eye health, and consumption of purslane can help prevent macular degeneration and cataracts.

8. Skin Conditions:
Purslane has been known to treat a variety of skin conditions due to its aforementioned levels of vitamin A. Applied topically it can improve the appearance of the skin by reducing wrinkles, as well as stimulating skin cell growth to help treat scars and blemishes.

As David Wolfe reiterates, purslane, once taken for a common weed, is a powerful health-boosting food that can be easily grown and consumed in a variety of ways. The beautiful yellow Portulaca Oleracea plant is extremely versatile, able to grow in a wide range of climates and regions, and is packed with fiber, vitamin A, vitamin C, Omega-3 fatty acids, multiple B vitamins, iron, potassium, calcium, magnesium, manganese, and copper, with additional betalain pigments and carotenoid compounds. By regularly consuming this potent little plant in culinary dishes and teas, you can instantly boost your overall wellness and reap the visible rewards, both inside and out.