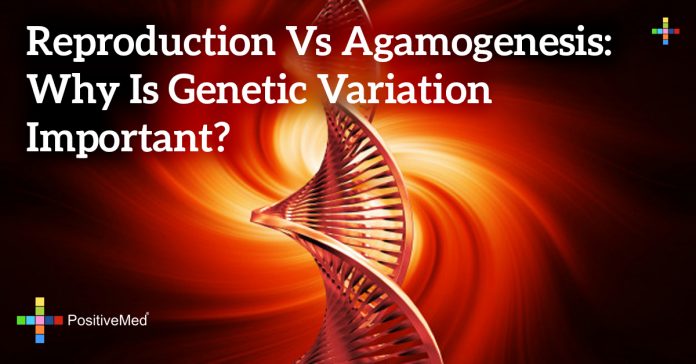 Reproduction vs Agamogenesis: Why Is Genetic Variation Important?

Apomixis, or reproduction without fertilization, sounds both easy and efficient. Through a variety of methods, an organism makes copies of itself. Life Noggin’s video “Why Don’t Humans Reproduce A$exually” explains some of the pitfalls of apomixis and the advantages of reproduction with fertilization. While apomixis can produce new individuals more quickly, those individuals lack genetic variation.

What is genetic variation?
Genetic variation is probably the biggest advantage of reproduction that involves two parents. Genetic variation describes the differences in the DNA sequences within the genomes of two or more organisms. It is also the reason why organisms can look somewhat different from each other, despite belonging to the same species or even family. For instance, it explains why someone can have brown eyes, while their brother has blue eyes.

Genetic variation has three main causes: mutation, gender and gene flow. Mutations are changes within a sequence of DNA and can be helpful or harmful. A helpful mutation can improve an organism’s chances of surviving and thus get passed down to future generations. A harmful mutation can kill. Gene flow or gene migration occurs when two populations interbreed. As a result, a set of genes from one population is shared with the other. While all three drivers of genetic variation can affect organisms that fertilize eggs, only mutation affects organisms that practice apomixis—and not all mutations are beneficial.

What is Muller’s Ratchet?
Muller’s Ratchet, which is named after the geneticist Hermann J. Muller who first proposed it, is a population model in which deleterious mutations accumulate within a population. If there is nothing to counteract the harmful mutations, and they continue to accumulate, the afflicted population eventually dies out. Small populations and organisms that practice apomixis are particularly vulnerable to the effects of Muller’s Ratchet.

In 2010, researchers at the University of Iowa studied a snail species (Potamopyrgus antipodarum) that has both populations that practice both types of reproduction. By sequencing their mitochondrial genomes, the researchers discovered that the snails that fertilized eggs had accumulated harmful mutations about half as quickly as the snails that did not.

The Red Queen hypothesis describes a phenomenon seen in coevolution, in which two species affect one another’s evolution. For example, many organisms have parasites. The host organism might develop a trait like a tougher skin to protect itself from the parasite. In order to avoid starving, some the parasites then develop sharper teeth or a longer proboscis to penetrate the tough hide. The host then evolves another defense, and the parasite develops another attack. Neither creature gains a permanent advantage; like the Red Queen and Alice, they are running in place.

Researchers at the Indiana University used P. antipodarum in studies to determine if and how the Red Queen hypothesis affected different populations. The snails are often parasitized by a species of trematode worm. They found that while the apomictic snails had larger populations in areas with fewer worms, the reverse was true in areas with lots of parasites.

Another aspect of the Red Queen hypothesis is that parasites tend to target hosts with common genotypes while ignoring those with rare genotypes. As the apomictic snails were all clones, they were all identical and had common genotypes, which made them targets for the worms. Some of the snails that reproduced with fertilization had rare genotypes and were thus spared. Their greater genetic diversity enabled these snails to better survive the parasites.

READ ALSO: Find Out How Humans Will Look Like In 1,000 Years…And WHY?

The trouble with clones

A clone is an organism that is genetically identical to its parent. While most people think of clones as being artificially produced in a lab, they can occur naturally through apomictic reproduction. Identical twins are clones of each other, for they result when a fertilized egg divides into two.

Clones, as seen in monocultures, can thrive under the right conditions – but a disease or fungus that affects one clone can affect them all and thus wipe out the population. Similarly, changes in the environment that hurts one clone will hurt them all.

For example, a cold snap can kill plants. If all of the plants are clones they are identically vulnerable, and they will die. Plants that reproduce through fertilization may have produced some individuals that can tolerate cold, and those plants will survive. Fertilization thus increases a population’s chances of survival in a changing environment.