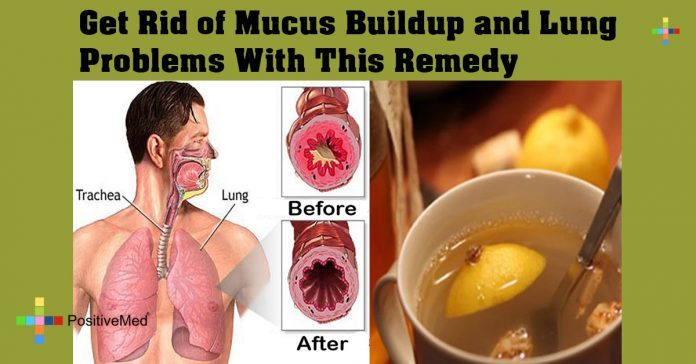 Get Rid of Mucus Buildup and Lung Problems With This Remedy

The lungs are one of the most important part of the body’s immune system. They are responsible for the distribution of oxygen into the bloodstream. That connection between the interior of the body and the exterior environment is very thin. In order to prevent diseases from traveling back and forth, mucus is developed by the body to help insulate that connection. However, the body sometimes produces too much mucus. When this happens, certain airways can be blocked. The nose is one example, and in some cases mucus buildup in the lungs can lead to restricted internal airways. Of course, there is a natural remedy for mucus buildup in the lungs, and that remedy is described below.

The average person produces about one liter of mucus per day. That is a lot, and that mucus has to go somewhere. If it is not either spit out or swallowed, it can create a blockage in the path of the airway. If there is blood in any mucus that gets coughed up, that person should see a doctor right away. There could be a serious issue with the lungs, throat, or nasal cavity. The presence of a greenish color in the mucus also indicates disease.

Children are often most susceptible to diseases that cause mucus production to skyrocket. They are exposed to more elements, and their immune systems are less developed than an adult’s. A persistent cough from the child might indicate a build up of mucus in the lungs. Excessive mucus in a child’s lung can be even more serious that in an adult’s. Children are less able to break through the blockages the develop from mucus overproduction.

In order to combat the symptoms of mucus buildup, you’ll need a natural remedy that restores the lungs to their proper state. The remedy is quite simple, and it only requires a few basic ingredients that many people already have in their homes. The ingredients are water, oats, and honey. You’ll need 100ml of water and 100 ml of honey. You can use a variable amount of oats depending on your preference.

RELATED ARTICLE: What The Color Of Your Mucus Says About Your Health

First, rinse the oats and mix them with the honey and water in a boiling pot. Boil the ingredients over low heat and allow it to rest overnight. Strain the liquid the following morning in order to remove any solid pieces of oat leftover. It is best to store the drink in a glass bottle. That will allow the drink to last longer. Refrigerate the beverage and it should last roughly one week.

The trick to making this magic mucus cure work is to take about 40ml of it. It’s best to do so on an empty stomach so the mixture can work its magic. The drink is safe enough for children to use, and it should be used for increments of 40 days. A 15-day break is needed between each 40 day treatment period. If you are vigilant and perform the cleanse exactly as described, you’ll see markedly reduced mucus production rates. The effect is especially noticeable in children. A single treatment can make a huge difference to a child suffering from mucus overproduction.

Mucus production will be reduced with this beverage, regardless of how excessive it is. This mixture is well-known to help clear the lungs and make them function properly. It is safe for all ages, and it is completely natural. There are other natural remedies for phlegm and mucus as well, and many of them are equally effective.

One of the most common natural remedies for phlegm and mucus production is tea mixed with lemon juice and honey. This is a good remedy because it not only soothes the throat, but it helps dry out the lungs as well. Another great mixture is honey and black pepper. The pepper helps fight infections and reduces mucus production and the honey helps reduce sore throats. Drinking plenty of fluids and remembering to blow your nose will help as well.