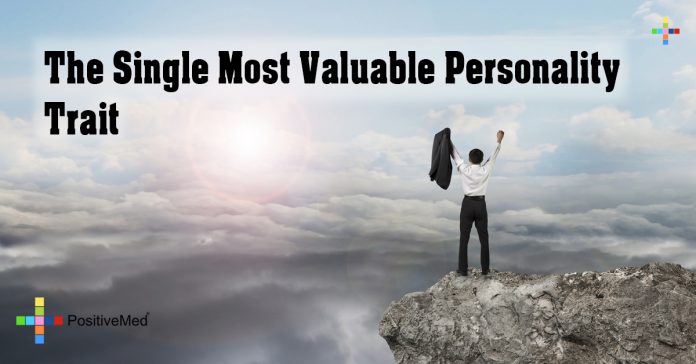 The Single Most Valuable Personality Trait

[nextpage title=”…”]
What is it about humans that separate those who achieve success in their lives, both personally and work wise, and those who seem doomed to failure? In many cases, a personality trait plays a key role. We’ve all met people who are enthusiastic, bubbly and usually upbeat. In many cases, these people are also successful.

There have been many studies asking the question, “which personality trait is the most valuable.” Usually the following ten traits make all of these lists: humble, courageous, grateful, tolerant, loving, forgiving, selfless, honest, persistent and patient.

These defined personality traits are all noteworthy. But recent studies point to one particular trait that seems to encompass all of them and is the most valuable in achieving success and happiness: Conscientiousness.

Consciousness is defined the state of awareness. It’s the ability to experience and feel a sense of wakefulness, self hood and having the control of your mind.

Because of recent developments in technology, significant research is being conducted on the subject of consciousness. In the fields of psychology, neuropsychology and neuroscience, studies over the past decade have focused on trying to understand what consciousness means both biologically and psychologically. These studies are conducted by asking people to describe verbally their life’s experiences

In terms of success, a person with a strong sense of consciousness has a much better chance of finding future success in their personal and career life than those who don’t.

According to Paul Tough in his book, “The Single Most Valuable Personality Trait,” he is adamant in his belief that consciousness is a primary reason people function successfully over their entire lifetime.

He argues that if you are a person who takes pride in being neat, organized, systematic and efficient, you are probably more successful than those around you who don’t have those traits.

RELATED ARTICLE: What’s Your Personality Type According to the Way You Hold Your Fist
[/nextpage] [nextpage title=”…”]

Being vigilant and careful, both signs of consciousness, usually means you achieve your best when assigned task.

Anyone who utilizes and performs all of these traits can usually be found in the fast track climbing the ranks faster than those who lack a strong sense of consciousness.

Mr. Tough goes on to layout a number other reasons of as to just why conscientiousness is such an important and valued aspects of one’s personality.

One of the findings from his research illustrates the difference between conscientiousness and neuroticism. Consciousness has a strong impact on increasing the success of finding a job. Neuroticism, on the other hand, has a negative impact.

In one of the tests of adults over the age of 45, they found that those who scored in the top 10 percent on consciousness were 40 percent less likely to have metabolic syndrome. That is a biochemical and physiological problem associated with the development of cardiovascular disease and type 2 diabetes.

Conscientiousness has also been proven to be a keen predictor of longevity when measured from childhood. It is also the best personality trait to have when predicting a long life span for adults.

One shouldn’t fret if they feel like they don’t have the qualities associated with conscientiousness, however. There is always a way we can find a way to recreate ourselves using conscientiousness behavior as a guideline.

Unfortunately, there are many who will not recognize the value of living a life guided by conscientious behavior. For those trapped in a personality of unawareness, reading Tough’s book might open your mind. Look for the many good points that strongly suggest that a conscientious frame of mind goes a long way to achieving a successful lifestyle.